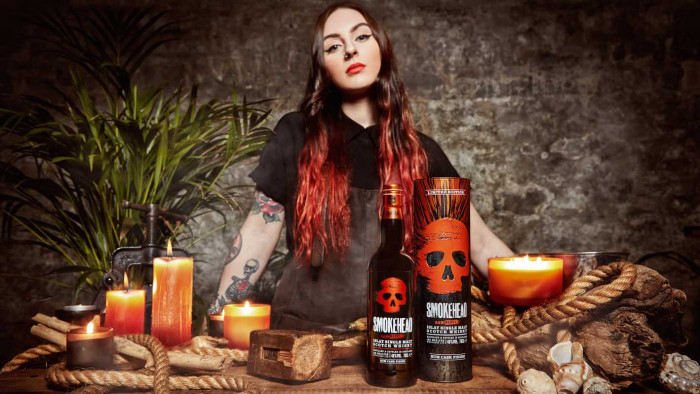 If you like your whisky with a massive hit of smoke, then you will be familiar with Smokehead - the Islay whisky famed for its heady peaty flavour.

The whisky brand has revealed its latest expression, and it's one that has had a little help from another spirit... rum.

Smokehead Rum Rebel is a new smoky Islay expression that has been aged in Caribbean rum casks and has launched on International Rum Day (16th August) to gatecrash the rum party.

Taste wise, it's a "rich, smoky and salty" single malt with a "sweet and spicy" finish. We've been lucky enough to have a taste and it's packed with flavour and more sweetness than we were expecting.

Sold by Ian Macleod Distillers, Smokehead has been making waves in the whisky world for a while now, thanks to its intense, peaty taste and a bottle that's quite unlike any other whisky on the market.

Priced at £54.99 with an ABV of 46%, Smokehead Rum Rebel is now available and sits alongside Smokehead's other malts, which include the original Smokehead, Smokehead High Voltage and Smokehead Sherry.

To get you in the mood for International Rum Day, Smokehead has also released a cocktail recipe to go with its new whisky. Called the Smokito, here's what you need to make it:

You need to add mint and sugar to the glass and stir for 2 minutes, then add the lime and water and stir for one more minute until all the sugar has dissolved. Then add ice and pour the Smokehead into a highball glass. Finish with a sprinkle of a few flakes of smoked Maldon sea salt.

If that's got you in the cocktail mood, then head to our best cocktail books guide and check out our best whisky and best rum guides for more drink inspiration.

If you want to learn more about the Smokehead Rum Rebel then brand ambassador Mikey Sim will be hosting an episode of Smokehead TV on its Instagram.