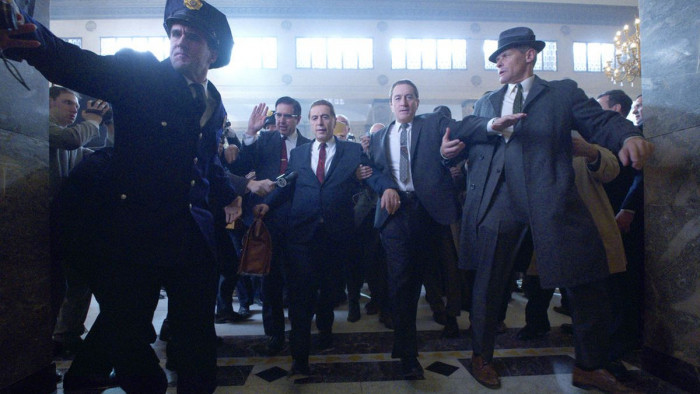 Featuring the who’s who of Hollywood and enough CGI to make even the deepest of De Niro’s wrinkles seem like a mirage, Scorsese’s latest blockbuster, The Irishman, was always set to become the focus of critical attention.

But now it seems Scorsese can sit back, safe in the knowledge that his latest endeavour has wowed the critics - including those he’s previously gone to war with over ratings.

Described as "Martin Scorsese’s best crime movie since Goodfellas" by IndieWire and "a haunting, poignant, twilight-of-the-gods drama tinged with regret, driven by monumental ambition, and smothered in the red sauce of violence” by Esquire, the epic 3 hour 30 minute self-indulgent feast requires accompanying snacks by the bucketload.
It was only a couple of years ago that Martin Scorsese wrote an op-ed piece for the Hollywood Reporter denouncing aggregating sites like Rotten Tomatoes - the very site that, as it turns out, has just awarded his film the perfect 100% rating.
Following the release of Silence, Scorsese’s guest column noted “even the actual name Rotten Tomatoes is insulting” and described its ratings as similar to “the way you’d rate a horse at the racetrack, a restaurant in a Zagat’s guide, or a household appliance in Consumer Reports."

Now though, that very site has hailed his latest mob-based endeavour a triumph, officially certifying the film ‘fresh’ on the Tomatometer.

It’s a sentiment echoed by the New Yorker critic Richard Brody, who notes “It runs a minute shy of three and a half hours, and I wouldn't wish it any shorter.”

Following the tale of a World War 2 veteran and former mob hitman Frank Sheeran (De Niro), the film sees him reflect on the moments that defined him - in particular, his involvement in the murder of Jimmy Hoffa.
And it seems the positive reviews just keep on coming - despite negative feedback on the film’s Call of Duty-esque effects - with one Vanity Fair critic declaring: “I found myself reluctantly taken by the movie, and the way Scorsese uses it to maybe, just a little bit, atone for some of his own past blitheness about violence.”
If the reviews are anything to go by, we’re rubbing our hands with glee at the prospect of The Irishman’s limited release in theaters November 1 and arrival on Netflix on November 27.