It's a glorious gangster-filled return 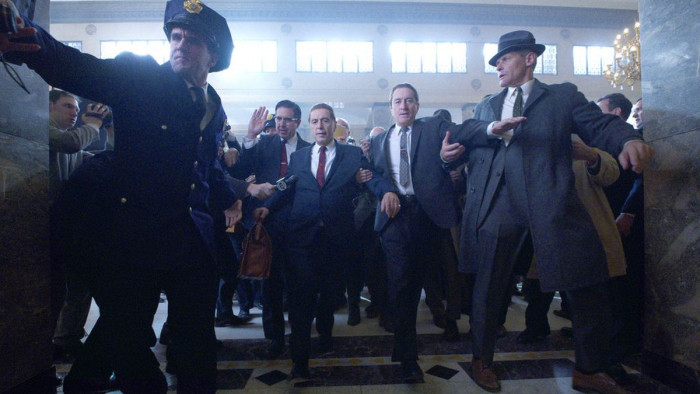 It’s time to roll back the clock courtesy of Martin Scorsese’s upcoming film The Irishman - or, more specifically, Robert De Niro’s face with the help of the film’s special effects department. Yes, the trailer for the highly-anticipated Netflix film is here - and it’s as action-packed as we’d hoped.

The cast alone is enough to entice you into Scorsese's criminal underworld, with a stellar line-up, including Robert De Niro, Al Pacino, Anna Paquin, Joe Pesci, Bobby Cannavale, Ray Romano, Jesse Plemons and Harvey Keitel. But, combined with incredible special effects and a gripping story, this film looks to be worth the wait.

Set over the course of several decades, the film’s plot is based on Charles Brandt’s book I Heard You Paint Houses. It tells the tale of Frank Sheeran (De Niro), a war veteran, infamous gangster and hitman, who finds himself caught up in the murder of fellow gangster Jimmy Hoffa (Pacino).

It’s classic Scorsese territory, given the director’s incredible list of gangster-themed cinematic credits - from Goodfellas to The Departed.

Given the length of time the story spans, the crew were faced with two options: opt for the traditional route and find an actor resembling a younger version of De Niro, or the alternative: take extreme measures to roll back the clock using advanced CGI.

Needless to say, an ambitious Scorsese chose the latter.

And the results are pretty impressive. The trailer stands as a testament to the lengths the special effects department went to in order to roll back the years, proving that together, humans and computers can seemingly pull off the impossible - albeit whilst ensuring De Niro resembles something out of Call of Duty.

But let’s be honest, who wouldn’t want to look decades younger given the chance?

Gangster glory at its finest, the trailer for the 209 minute comedy-tinged affair really does channel The Departed in terms of stylised editing and Goodfellas when it comes to beautifully shot violence. We’re pretty excited.

The film is set for limited theatrical release on November 1, before landing on Netflix on November 27.