New Cobra Kai: S5 teaser proves why this is one of the best Netflix shows around

The new season is coming soon. 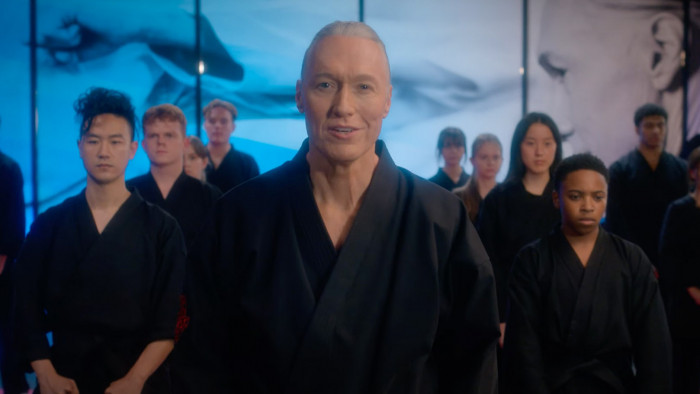 A new teaser for Cobra Kai: S5 has just landed and with it the release date for the upcoming season.

Since it made the switch from YouTube Red to Netflix, Cobra Kai has been one of the best-received shows on Netflix.

Following the exploits of Daniel LaRusso (Ralph Macchio) and Johnny Lawrence (William Zabka) some 35 years after the infamous All Valley Karate tournament, it's a brilliant homage to the original trilogy of movies, while bringing the karate-chopping characters to a whole new audience.

The first four seasons of Cobra Kai has riffed off some of the best scenes and characters of the original movies and Season 5 is set to do the same, with more familiar faces returning.

The Cobra Kai: S5 teaser showcases new alliances, after the results of what happened at the end of Season 4, which saw *spoilers ahead* Kreese (Martin Cove) arrested and Terry Silver in charge of Cobra Kai, after rigging the results of the final fight which lead to Tory Nichols (Peyton List) winning the All Valley Tournament.

There also hints at just what Miguel Diaz (Xolo Maridueña) is doing in Mexico and we see Samantha LaRusso (Mary Mouser) still practising karate, after her defeat.

We also see the return of Chozen (Yuji Okumoto) who is helping LaRusso to pick up the pieces from the tournament as, true to their word, the win has meant that Miyagi-Do Karate and Eagle Fang have closed.

Season 5 is set to reveal the repercussions of this.

Alongside the teaser is a Cobra Kai: S5 release date which is 9 September. Not long to wait, then, for one of the best shows on Netflix to return.