Marks the first time you will be able to combine shapes. 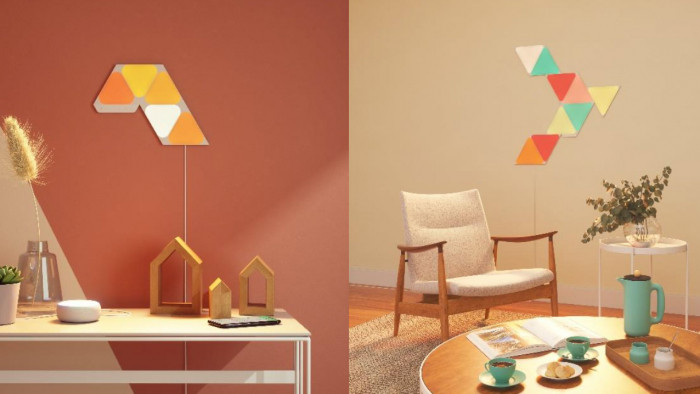 We are big fans of Nanoleaf at ShortList. The smart light makers intro'd Nanoleaf Shapes - Hexagons earlier this year and they came at just the right time, to offer up some light to a world in lockdown.

This means that you can add in a bunch of triangles (there are small and large variants) to your current hexagonal designs and they will work in harmony together.

According to Nanoleaf, the new shapes (and it promises that more shapes will be coming) "give users the ultimate creative freedom to design everything from abstract geometric styles to truly immersive lighting mosaics".

For those who haven't yet looked at getting a Nanoleaf setup, they are a set of panels you can stick to any wall that you can control via an app to create bespoke colour schemes.

They work with Amazon Alexa, Google Home and Apple HomeKit and are a decent way of both decorating a room and making it smart.

The new Shapes line-up are touch controlled, too, so you don't have to use the app to turn them on or off. When it comes to the app, Nanoleaf has redesigned the interface to make it easier to use, complete with a new colour picker.

Nanoleaf has also revealed that it is getting into the smart bulbs and light strip game with Nanoleaf Essentials. The bulbs take on the likes of Philips Hue head on and are made in an 'interesting' shape, they are - deep breath - a rhombicosidodecahedron. These will be available in November.

Nanoleaf has also released a number of smart switches for your lighting setup.