Twitter reacted how you'd expect to the M&S 'Love Sausage'

It's the innuendo the world as we know it 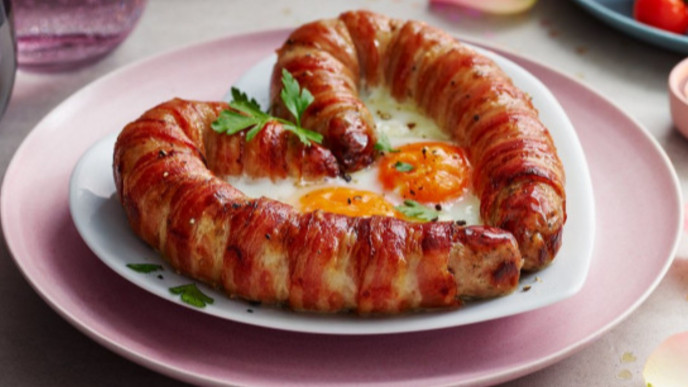 There are plenty of phrases in the English language which should be verbs but not nouns.

Now we have another to add to the list: ‘Love Sausage’, the latest creation from Marks & Spencer which they’re launching just in time for Valentine’s Day.

We’re certain M&S know exactly what they’re doing with the name of what is essentially a glorified ring of meat. Actually that doesn’t sound any better, does it?

Can we guess your personality from your cooked breakfast choices?

It’s a heart-shaped sausage, which M&S note is “lightly truffled” as well as being wrapped in bacon. This feels especially cruel, given the role of pigs in sniffing out truffles, but that’s hardly the main issue at hand here.

We get the feeling this is exactly the sort of thing self-checkout tills were made for, to avoid the smirks of till assistants as they turn towards you like a TV character breaking the fourth wall and lower their voice to say “love sausage, eh?”.

Normally you might see people serving up sausages with sauce on the side, but this feels saucy enough as it is.

It has been a big year for sausages already, with Greggs’ vegan sausage roll bafflingly dominating the news agenda - and Piers Morgan’s trolling attention - for a full couple of weeks.

The response to the Love Sausage – yes, we’re writing the phrase ‘Love Sausage’ again because we have to, not because we want to – was (and will continue to be) pretty in-depth.

Everyone on Twitter has the maturity of a 10-year-old, and frankly we’d be asking questions if a mere sausage innuendo was enough to bring that to an end.