It's lager but not as you know it 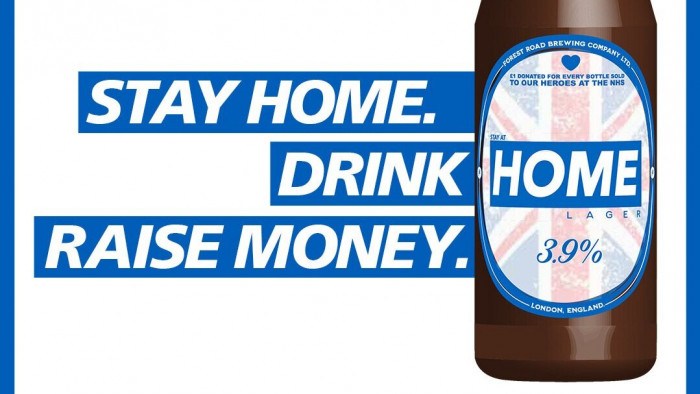 If there’s one thing (other than our love of the NHS) that unites a nation in the midst of a global pandemic, it has to be our adoration of good quality beer.

But with pubs and bars across the nation currently closed, many are finding Friday nights stuck indoors a bit of a challenge - cue an encouraging message from East London’s Forest Road Brewing Company.

Combining those two concepts that lie at the very heart of this fine nation, Forest Road has joined forces with Cameron’s Brewery to give their signature Home lager a pandemic-themed makeover.

And with £1 from the sale of every bottle will go directly to supporting the NHS, there’s never been a better reason to stay home, crack open a cold one and hunker down this weekend.

However, Forest Road aren’t alone in their mission to encourage and support the nation through lockdown.

Rival beer company Brewdog recently launched the first ‘shower beer’ named Lock Down, described as “clean and refreshing. Just like your shower.” The truth of the matter is, we all want a beer that’s designed to quench your thirst - even when we’re surrounded by water.

Whatever the case, the nation (and the beer) are certainly the winners in this situation. After all, there’s nothing like a global pandemic to trigger rivals to rally behind a good cause - our NHS. We’ll drink to that.

Priced at £22 for 12 bottles, you can pick up Stay at Home from the Forest Road Brewing Co. webstore. If you fancy Brewdog's Lockdown Lager, then head to its store.