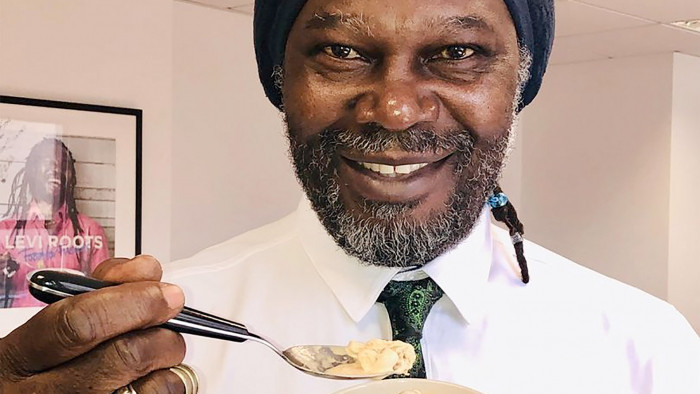 Levi Roots and his Caribbean-inspired Reggae Reggae sauces were a food phenomenon. And now, having already conquered the supermarket shelves and the charts (yes, he was once nominated for a MOBO Award and has released seven cookbooks), the Brixton-based jerk master is set to churn out his very own brand of Reggae Reggae ice-cream.

Roots - real name Keith Valentine Alexander David Bright Graham - has signed a three-year licensing deal with a Cornish ice-cream company to produce the unique range of ice-creams and sorbets. And it's expected to launch next year. Yikes.

“I am so excited to be launching my very own fabulicious range of the most delicious flavour ice creams you will have tasted,” Roots said in an interview with Cornwall Live. “Check them out and let your taste buds be jumping for joy.”

Roots first shot to fame on the hit BBC TV show Dragon’s Den after being approached by a producer who spotted him selling his jerk sauces at the Notting Hill Carnival. Catching the eye of investor Peter Jones, Roots went on to secure £50,000 worth of funding and introduce the world to his now-famous Reggae Reggae sauce.

After joining forces with the award-winning Callestick dairy farm near Truro, Cornwall, Roots’s latest culinary creation appears to be peaking the interest of the major supermarket chains according to the farm.

“We’ve had many meetings with Levi and his team over the last few months,” notes Callestick sales director, David Jeffs, “and the flavours we are working on are truly delicious and very different to anything you will currently find in freezer cabinets.”

As for whether this truly unique ice-cream will have a chilly reception? We’ll just have to wait until 2020 to find out. Our best guess? It's probably not BBQ Jerk flavour, but we've heard of stranger combos.

Reggae Reggae ice-cream not really your thing? Why not make your own with our pick of the best ice cream makers.