Head to Covent Garden to see it. 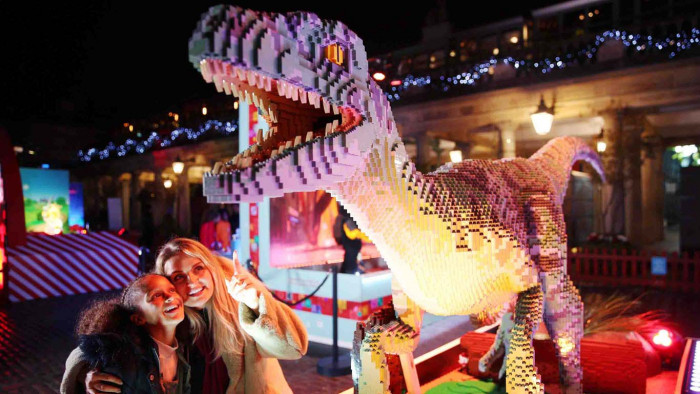 We're in London, a place where we normally work. Because of EVERYTHING, though, we've only been into the city proper a handful of times since March.

It's chucking down with rain but it's great to be back. There are not as many people around but the city has put on its best display, with Christmas decorations standing proud and the pubs and restaurants that have managed to open are welcoming a steady gaggle of people.

Saying that, Covent Garden is a little more subdued than normal. We're not sure if it's the rain or the pandemic. Street performers are nowhere to be seen, a lack of tourists apparent. We can't believe we are going to write this but we bloody miss the crowds!

There is a very good reason to head down to Covent Garden, though, and it's brick based. LEGO has set up an installation that showcases a whole host of its creations.

Based around its holiday season advert, which sees kids reinterpret the lyrics to It's A Wonderful World and, in turn, the world around them, it's heartwarming stuff and does exactly what a Christmas ad should do - hit you right in the feels.

The 'real-life' version of the ad is just as impressive. The A Really Cool World installation at Covent Garden is a short brick-built journey through the eyes of a child. 'Trees of green' become sausage trees, 'red roses, too' shift into a horse that's blue... and so on.

From dinosaurs to Iron Man, a Star Wars-inspired snow globe to a lady knight fighting a dragon, there's a lot to take in. It's not quite as interactive as its makers wanted it to be, given the circumstances but you can fire up Snapchat for some Easter eggs, have a dance in the LEGO Dots dancefloor, all the while trying to spot all the Father Christmases to win a prize online.

The installation is free but you need to book and it will be in Covent Garden from the 5th December to the 2nd January 2021. If you can't get to London, then there are virtual tours of it available here.