Joker through the ages: 8 ways he’s been shaped by the real world

There are many sides to the Joker. 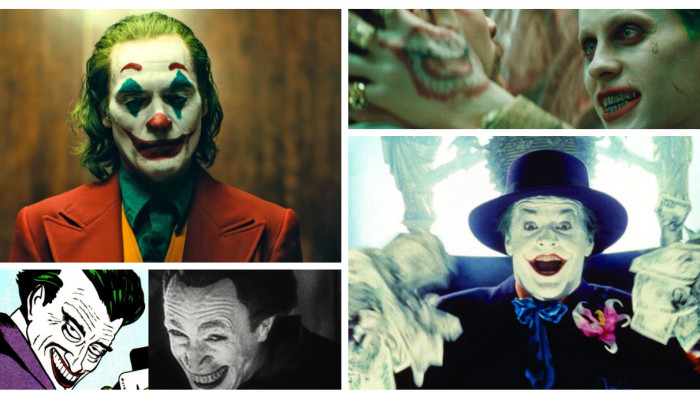 DC’s Clown Prince, the Joker, returns to the silver screen in live-action form thanks to Todd Phillips’ Joker and since the solo film has premiered at the Venice Film Festival and the Toronto International Film Festival it has already earned some polarising reviews.

Many have commented on how Joaquin Phoenix’s iteration of the Batman villain is a clear reflection of the times we live in, which has pretty much been the case for the Joker ever since he made his first celluloid appearance 53 years ago.

So much of what is going on in the real world has shaped the maniacal villain’s portrayal and worldview ever since so here’s a look back through the ages at how the Joker has evolved into the big screen villain we have today.

Before Joker became one of the most influential comic book characters to transition to the silver screen, he was inspired by it. Bob Kane, the artist who invented the villain was heavily influenced by the 1928 silent movie The Man Who Laughs, specifically the look of Conrad Veidt’s character Gwynplaine and you can easily see where Joker gets his maniacal grin, long nose and slicked back hair from.

Thanks to Dr. Frederick Wertham’s 1954 book "Seduction of the Innocent: The Influence of Comic Books On Today's Youth," parents started to think crime-themed comics were a bad influence on their kids, so in order to stay in business, publishers created the Comics Code Authority to self-regulate their content. This meant Joker went from murderer to mischief maker, which informed Cesar Romero’s first live-action outing as the baddie.

In 1964, Susan Sontag published her essay “Notes on 'Camp’” that describes it as “a love of the unnatural: of artifice and exaggeration,” which pretty much sums up the 1966 Batman film and subsequent series, right? From his green hair and white painted face (over the mustache the actor refused to shave) to the flamboyant costume and love of puns, Romero’s Joker is the living embodiment of “camp” and we loved it.

If it wasn’t for Tim Burton’s innovative gothic comedy we would never had his acclaimed 1989 Batman or Jack Nicholson’s groundbreaking performance as the Joker. Burton’s visual style lent itself well to the camp of Cesar Romero which Nicholson took and infused with the psychotic persona he’d wielded nine years earlier in The Shining to menacing effect. This revamp realigned the villain with the (once again) darker comic book iteration rebooted in the ‘70s.

The Savings and Loans crisis of the late ‘80s was considered the most catastrophic collapse of the banking industry in the US since the Great Depression and caused great public distrust in the government because of the investigation that showed several senior government officials enabled it to happen. Nicholson’s Joker is the epitome of that political and economic turmoil as a corrupt businessman who wants to disrupt businesses, take control of the city and plays on Gotham’s financial anxiety to lure its citizens to their death with the promise of free money, all to the tune of Prince’s “Trust.” Interestingly, the Financial Institutions Reform, Recovery and Enforcement Act was introduced, to better regulate the savings and loans industry, a few months after Batman’s US release.

Nolan’s The Dark Knight came seven years after 9/11 but it’s narrative and aesthetic is a clear reflection of the “War on Terror.” Forced rendition, coercive interrogation and mass surveillance are all controversial means by which Batman attempts to stop the terrorist threat of the Joker, played in iconic fashion by Heath Ledger. Ledger’s iteration removes the personal animosity of Nicholson’s gangster version but ups the chaotic ante as he pushes his violent ideological agenda on Gotham’s civilisation. “The system is the criminal and destroying the established order is part of the solution,” he says. “You see, their morals, their code, it’s a bad joke.” And Joker wants to cackle as the world burns.

A few years later, Jared Leto gave the Joker role a go and brought back his gangster backstory but through an Instagram filter. David Ayer even admitted that he’d taken influence from drug lords posting about their extravagant lifestyle on the photo-sharing site. That sort of style over substance is reflected in Joker’s portrayal: every moment seems overly contrived while not saying much at all. Even the scene where Joker is surrounded by knives and guns has the same energy as that Kendall Jenner “hearts” hair post.

Now, with Joaquin Phoenix’s iteration we have a new brand of Joker terrorism this time steeped in angry white male extremism that is very plaguing present-day America. He is a card-carrying incel with a mass shooter mentality who believes public violence is a justified response to the personal slights he has endured. Love it or hate it, Phoenix’s Joker is the closest you can get to a realistic villain and what makes it even more disturbing is the fact that just like the film, in real-life, there are no caped crusaders to stop criminals like him.

Joker is in cinemas nationwide now - have your say on our best Batman actors list.