And, yes, The Sims' version of himself did make the list. 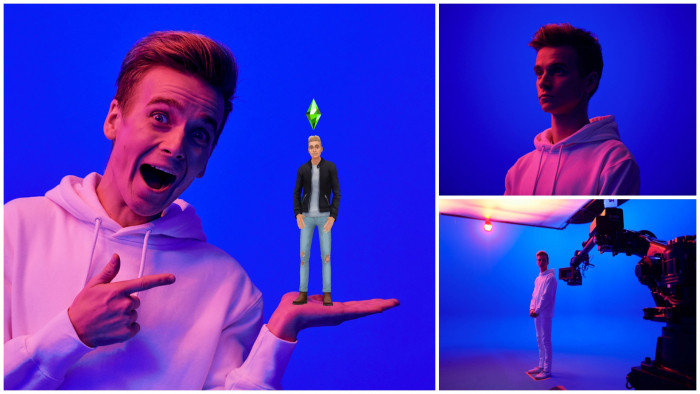 Under any video on his gaming channel ThatcherJoeGames, you’ll find streams of comments/demands from his 1.78m subscribers for Joe Sugg to play The Sims.

The 20-year-old game series is a fan favourite on his channel, with the now 28-year-old having dedicated weeks of his life causing reality TV-style drama in The Sims universe for the entertainment for strangers on the internet.

All of which means the news Sugg himself is being turned into a Sim will no doubt send thousands running to their consoles ready for an all-night stint on the game.

As part of the launch of The Sims’ latest Play With Life campaign, Sugg was one of a number of celebrities, including High School Musical royalty Vanessa Hudgens, to be turned into a Sim.

Explaining why he was involved, Sugg said it was because The Sims was “the only game he’s consistently played for the last 20 years”.

“[The Sims] is in a league of its own. There’s nothing quite like it and it’s clearly stood the test of time,” he adds.

"And he’s right, whether you were a typical gamer or not - you will have definitely played The Sims at least once during your teenage years. And that’s as much true now, as when it was first launched back in 2000, with The Sims 4 - now five years old - reporting it has an average of 200 million active monthly players.

“Growing up we only had a family PC, so we had to have a rota system to stop fights between my sister and me,” Sugg laughs. “I would come home and get to play for the first two hours and then she’d get to play later.

“The worst thing you could do to your sibling was go into any of their time, or even worse, go into their world and mess with their house.”

But, what’s it like to be turned into a Sim? Well, according to Sugg, the process was just like being in a Kendrick Lamar music video.

“On the shoot they had this camera and it was the same kind they used for [HUMBLE] where it zooms round his head,” he explains. “It moves so fast and it’s on a crane arm.

“They programme it to be within an inch of your face and then it will spin around you. You’re stood there really still just putting your faith in technology and hoping it’s doing its job.”

When it came to styling his Sim (whose outfit is currently a jeans, t-shirt and black denim jacket), Sugg did have a little input but he wants to leave it up to his fans when it comes to his fashion choices.
“The joy of The Sims is that you can make yourself look exactly how you want. You don’t have to lock yourself in so you can try new things out,” he adds. “If fans want to pierce my ears? You can. Even though I’m too scared to get it done in real life.”
Which sounds like a challenge to us, one that we’re certain his fans will take up eagerly.

And if you're looking for more gaming inspiration, then you'll want to check out the shortlist below. Created by Sugg himself, there are plenty more old school picks where that came from.

Revealing Joe Sugg’s all time favourite video game characters - after all, who better to ask than a man who’s been turned into one himself.

Joe Sugg’s mini-me is available to download now and you can buy The Sims 4 now on PlayStation 4, Xbox One and PC.

“I have to put myself as a Sim at number one - it just has to be done. I’ve grown up with The Sims and been playing it since I was a kid. I can now say to my fans who have loved my Sims series throughout the years of doing YouTube that I am now part of the game. You can download me into your Sim’s house and that is so cool.”

“I used to be slightly in love with her when I was younger." The Queen of Video Games? "I would agree with that.”

“Daxter from the Jak and Daxter games has to be up there. I was going to put Halo’s Master Chief at three, but I think he has to slide back one (sorry Master Chief!).”

“I only really liked one of the Halo games - Halo 3 - but I played it a lot when I was a teenager and the game was really big for me. I just really enjoyed playing him as a character.”

“Can they count as one? I have to put them in for old times sake. It was the first game I ever played because my first games console was a Sega MegaDrive.

“I feel bad that I’ve missed out Sonic and all those retro classics but I think that’s too obvious. I’ve gone a bit obscure.”