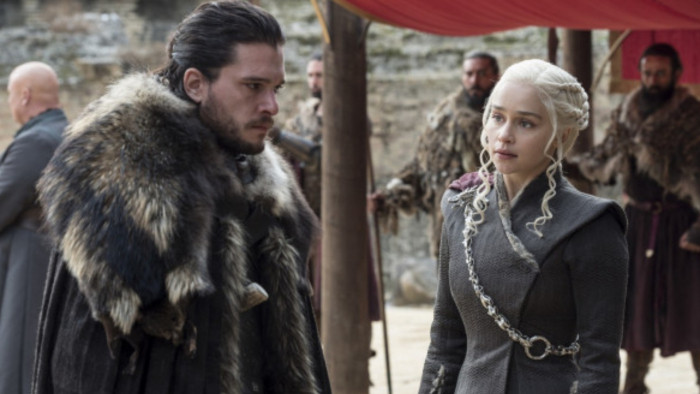 Episode two of Game of Thrones’ latest season felt like the calm before a colossal storm, and HBO has seen fit to share some stills from the upcoming bloodbath ahead on Monday night.

Of course, there’s not much actual blood in them, just a few things for you to speculate on. Here’s Jon Snow and Daenerys, for example, auditioning for a role in the next John Lewis Christmas advert.

On the less ‘picture postcard’ end of the spectrum, here’s the army led by a somewhat spooked-looking Brienne of Tarth.

Here’s Jon Snow wearing that same slightly haunted look he’s had since he first laid eyes on a White Walker.

And Lady Sansa having a sororal chat with Arya next to what looks like a furry seeming rock.

Meanwhile, Tyrion and Varys are hanging out down in the crypts. Which sounds like the best place to be, until you remember that the Night King has the power to raise the dead. And there’s quite a few dead folks in Game of Thrones to choose from, if he fancies.

All in all, these pictures don’t give a great deal away, which is pretty unsurprising. There’s one more picture that people have been studying carefully – here it is. See if you can figure out why:

No? Here’s a zoomed-in crop.

Probably just an innocent photobomb, but some people are speculating that that’s the fizzog of everyone’s favourite confusingly-accented villain Little Finger. Maybe he’s not dead after all?

We’ll find out on Monday. Here’s the teaser for the next episode, in case you haven’t seen it.