Going, going, gone: Jack Nicholson’s The Shining axe is up for sale

Who said you can’t buy class? 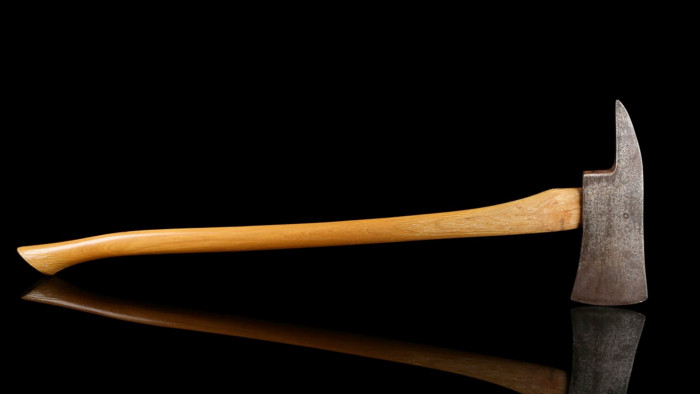 Ever fancied recreating the iconic scene from The Shining where Jack Nicholson breaks down the door with that axe and screams, “Here’s Johnny!”? Yeah, we knew you had. You’ll be pleased to hear you can now get your hands on a genuine piece of Hollywood history in the form of that exact axe - among many other items - in an up-coming rare memorabilia auction.

Held at London’s BFI Imax and live-streamed with the help of Odeon, the annual Prop Store auction will take place on September 30 and October 1 and features a host of rare props and clothing from across the world of film and television.

The downside? You might have to dig deep, as the estimated total of the lots is expected to reach around £6 million.

Last year’s auction saw Harrison Ford’s signature fedora from Indiana Jones and the Raiders of the Lost Ark sell for an eye-watering £393,600. Not bad for an item of clothing you’d likely never wear.

Alongside the infamous Shining axe, you’ll also be able to purchase the set of Roman armour worn by Russell Crowe in Gladiator or possibly even pick-up the Batsuit worn by Michael Keaton in the 1989 Batman film. It might be worth mentioning, however, that the batsuit is expected to sell for more than £80,000 - so maybe remortgage your house in advance of the sale.

And let’s not forget the Holy Hand Grenade of Antoch seen in Monty Python and the Holy Grail, which is expected to reach upwards of £50,000.

With some 900 lots on offer, the sale notes there are items to suit a “variety of budgets”. So fret not if the bank balance is looking a little light, a Willy Wonka Golden Ticket announcement poster from the 2005 film could take pride of place on your living room wall for an estimated £300.

If that all still sounds a little out of your price range, a free-to-enter preview exhibition will take place ahead of the auction from September 18 so you can take a sneak peak at the items.

On reflection, we might just be able to stretch to the auction catalogue, which can be purchased for a mere £40 - they’re practically giving it away!