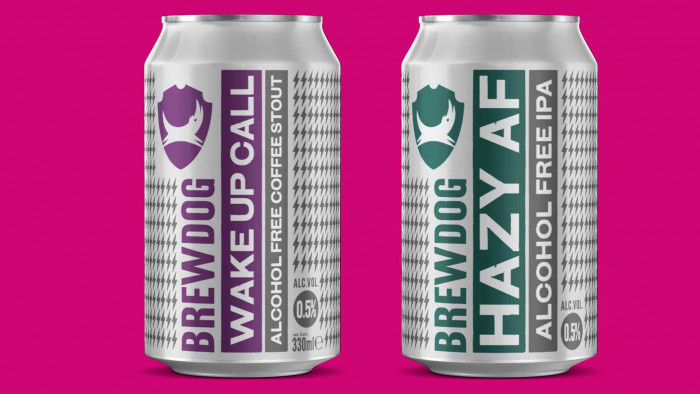 The first day of Dry January has arrived making it the perfect time for BrewDog to introduce two new alcohol-free beers to its range, Hazy AF and Wake Up Call.

Dry January is a month long challenge to stay off the booze and sober, offering a chance to detox following the Christmas period and also reassess your relationship with alcohol. Whether you’re taking part or simply driving and want a decent drink, BrewDog has you covered.
The Scottish craft brewery says it continues its “mission to prove that alcohol-free doesn’t have to equate to taste free – these AF beers bring all of the attitude, all of the flavour – but none of the alcohol.”
Hazy AF is a New England IPA that stays true to the East coast style with juicy tropical flavours and grassy notes. Brewed with both wheat and oats, the beer remains thick and smooth yet comes in at 0.5%.
It could be thought of as an alcohol-free version of the popular Hazy Jane and is available at BrewDog.com as well as Sainsbury’s and Morrisons nationwide.
Wake Up Call is pretty much an alcohol-free edition of Jet Black Heart, although sadly not a nitro beer. This coffee stout is 0.5% and along with rich coffee flavour, offers up notes of chocolate and has a smooth milk sugar sweetness. It’s available from BrewDog.com.
Hazy AF and Wake Up Call add to an already strong line-up of Nanny State, Raspberry Blitz and Punk AF. The latter being an alcohol-free version of its flagship Punk IPA, while Nanny State is the UK’s best selling alcohol-free beer.
BrewDog is so dedicated to the booze omitting sector that its inaugural alcohol-free drinks festival, BrewDog AF Fest, is just a matter of days away. It’s taking place in London, with guest producers and tickets are free.