​Bond songstress Billie Eilish sweeps the floor at The Grammys

The Bad Guy and No Time To Die singer topped the four major categories. 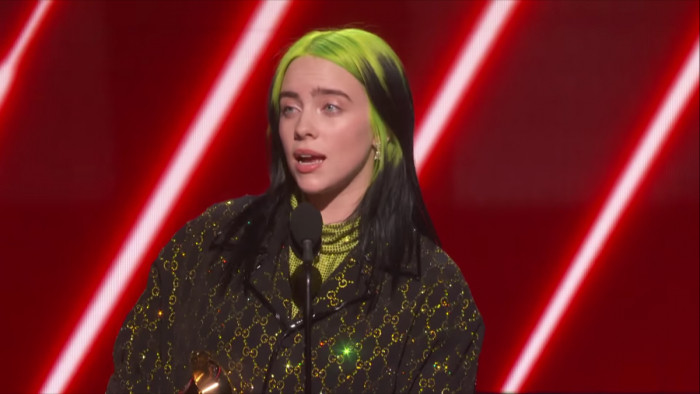 Last night saw the who’s who of the music industry descend on the Staples Centre in Los Angeles ahead of the 2020 Grammy Awards - or should we say, the Eilish Awards, given the number of categories the Bond songstress won at last night’s ceremony.

Picking up five awards in total, Eilish won record of the Year for her infectious track Bad Guy, as well as claiming victory in the album of the year category for her 2019 offering When We All Fall Asleep, Where Do We Go? and the award for best new artist.

And it didn’t stop there, because Eilish - who performed at the ceremony, with her instantly recognisable lime green locks - also nabbed song of the year and best pop vocal album.

It also means that the 18-year-old replaces Taylor Swift as the youngest person ever to win the album of the year award.

And if you’re into random trivia, listen up, because you might be interested to hear that When We All Fall Asleep, Where Do We Go was actually recorded in her childhood home and produced by her brother Finneas - who won producer of the year for his work on the album.

It’s been a big month for the teenager, after the news broke that Eilish is set to record the theme song for the forthcoming Bond installment No Time To Die.

The night took an emotional turn, however, as those at the ceremony - led by Alicia Keys - paid tribute to five-time NBA champion and Lakers basketball legend, Kobe Bryant, who passed away alongside his thirteen-year-old daughter Gianna and seven others in a helicopter crash that same day.

The tribute had added poignancy as the Staples Center, where the ceremony took place, is the home of the Lakers team.

The ceremony also featured a host of big-name winners, including awards for the likes of Tyler, The Creator for album Igor and best solo pop performance of the year for Lizzo.

Tyler, The Creator took to Twitter to hit back at someone who once told him years ago that he would never win a Grammy. It was all very tongue in cheek, but also a warning that sometimes celebrities do actually read what you Tweet at them!

I FAVORITED THIS 9 YEARS AGO JUST FOR THE MOMENT TO TELL YOU I GOT ONE. YES IM PETTY AS FUCK, GOOD DAY MARK. https://t.co/WfU85JeHEj
— Tyler, The Creator (@tylerthecreator) January 27, 2020

The night also featured a host of big performances, including a comeback performance from Demi Lovato after a two year absence and memorable moments from Lizzo, Lil Nas X, DJ Khaled and Run-DMC - who also paid tribute to the late basketball legend.