Bill & Ted Face The Music reviews are in and it's... totally excellent!

Thank Station for that. 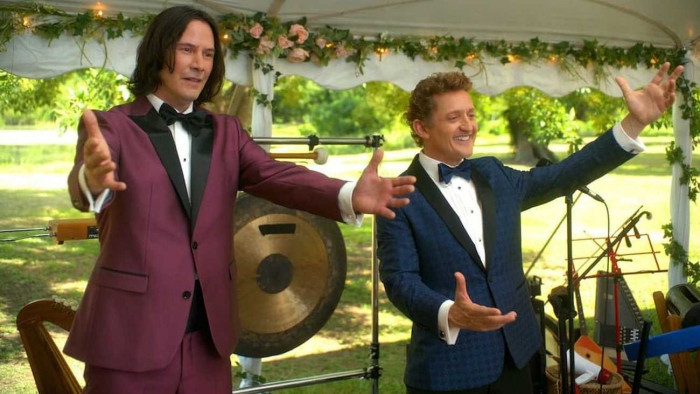 Bill & Ted Face The Music is out now to stream in the US (as well as on the big screen) and this means that the reviews are in for the movie. The good news is that you can breathe a massive sigh of relief.

It seems that Keanu Reeves and Bill Winter's third movie outing as Bill & Ted is a joy, filled with humour warmth and there may even be a few tears.

First the plot: Bill & Ted Face The Music is about the time-traveling rockers, now middle-aged dads, having to got on an adventure to make the perfect song that will save the world. They can't be bothered to come up with it themselves so decide to track down their future selves who have already written it.

It's been nearly 30 years since Bogus Journey came out, but the world's love for Bill & Ted hasn't withered as these reviews show.

The Playlist calls the movie a "film that’s somehow both offhand and meticulous, shaggy yet crisp, and the apparent joy of its creation is infectious."

Variety is smitten, too, noting: "The film is weightless and super-goofy - a blissed-out air balloon of nostalgia. It zips right along, it makes you smile and chortle, it’s a surprisingly sweet-spirited love story."

GamesRadar's review is just three stars but says that: "Face The Music is good-natured rather than sharply witty, it mixes old riffs and fresh variations with a pacy, goofy and eager charm that’s harder to resist than old flannel-wear."

Empire's three-star review also finds the fun, saying that it "cranks the nostalgia up to 11 as it sends the Wyld Stallyns on a time-travelling tour of old gags."

IGN also reckons the pair "still rock" in a movie that's "a sweet and entertaining romp that defies expectations by largely recapturing what worked about the series so many years later."

Although Bill & Ted is available now in the US, the UK will have to wait until September 16 when the movie will only be in cinemas - it's a week earlier than previously announced, though, which is a good thing.