Who said vegan food had to be healthy? 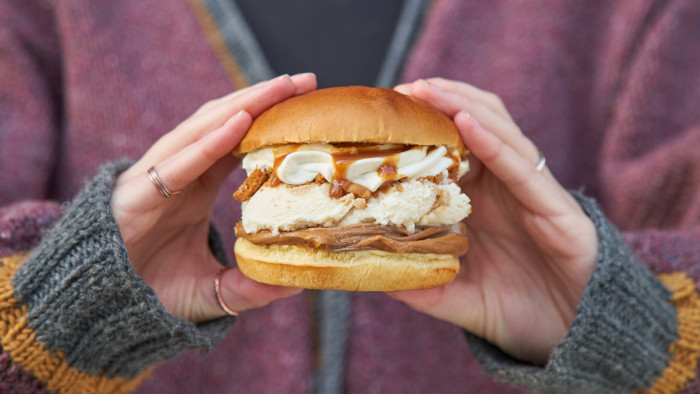 Vegan food has improved infinitely over the last few years, and now those eating a plant-based diet can find meals that are just as good as their meat-eating counterparts - or even better - as is the case with this Ben & Jerry’s burger.

The ice cream maestros have created the UK’s first vegan ice cream burger - and boy, is it a mountain of sugary goodness.

The Im-BOSH-ible ice cream burger was created in collaboration with (yep, you guessed it) BOSH!, and will be available at Ben & Jerry’s Scoop Shops in London, Berlin and Rotterdam.

As it’s in celebration of World Vegan Month, it’s around for one month only (November 1-30) so if you fancy getting your hands on it then you best be quick.

Priced at £5.45, the burger comes with your choice of Ben & Jerry’s non-dairy ice cream (we’d suggest Peanut Butter & Cookies), covered with speculoos spread and a salty sweet caramel sauce. If that wasn’t enough, it will be finished off with crumbled speculoos biscuits, a vegan whipped topping, all fitted inside a vegan brioche bun.

Not taking your fancy? Well, there are two other limited-edition items hoping to grab your attention, too.

And, the final item is the Campfire Snuggle Hot Chocolate, which sounds like the perfect autumnal treat. Made with a scoop of Ben & Jerry’s Non-Dairy Chocolate Fudge Brownie melted down and mixed with almond drink and cinnamon, it’s ticking all the winter warmer boxes.

For £5.45, you’ll also get vegan marshmallows, caramel popcorn and whipped topping to finish it off, so there’s certainly no skimping on the sugary delights here.