Get credit for your football skills off the pitch 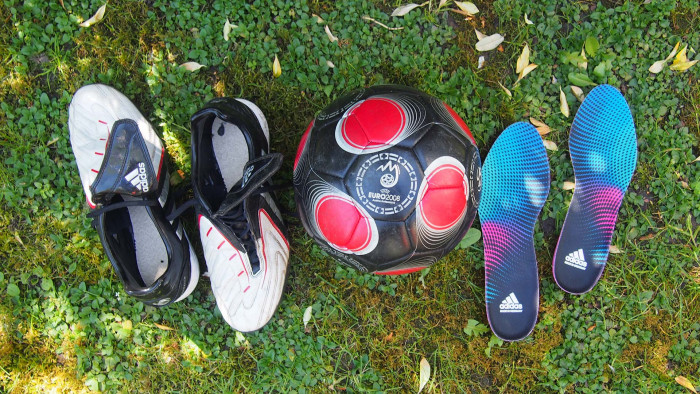 Football, we miss you. Watching it, playing it. We’d even go as far as to say we pine for the time we can start lambasting VAR decisions again.

Hopefully, it won’t be long until service resumes (whatever that looks like). But if all the football documentaries and films in the world one can’t fill that void, Adidas can help.

Launched last month, Adidas GMR aims to bring gaming and physical football worlds closer together through insoles fitted with a smart tag made by Google. When placed inside of whatever you normally kick a ball around with, the insoles track movement and log when you connect with the ball. Complete GMR's weekly challenges and you’ll unlock rewards in FIFA Mobile to bolster your Ultimate Team.

Despite current events making it a bit trickier to get outside, Adidas has added a series of ‘home’ challenges so you can have a kickaround without leaving the house.

We were fortunate enough to have some garden space to put the GMR to the test, to find out what it’s made of. Here are five things you should know before you buy.

The Adidas GMR insoles are available to buy now for £29.95 directly from Adidas

Not just for boots owners

One of the nicest things about the GMR insoles is you don’t have to own a fancy pair of Nike Mercurials to put them to use. The EVA foam insoles come in sizes suitable for shoes ranging from size 3 all the way up to 13. There should be an ideal fit for most.

If your go-to shoe has removable insoles, you can swap-in the smart insoles, but you do have the option to sit them on top too. When they get a bit sweaty from your footballing sessions, you can give the insoles a wash in cold water. Just make sure you remove the tag that does all the smart work first.

The small tag inside the GMR sole tracks stats like distance, speed, shot speed and number of kicks, and makes use of Google’s Jacquard technology.

There’s just one of these tags provided and it should be placed inside of the insole of your dominant foot. Housed inside that tag are accelerometer and gyroscope motion sensors, commonly found in phones, smartwatches and sports watches.

There’s also a small processing brain that uses Google’s artificial intelligence expertise to recognise the different football movements. This tech is similar to what Google has already put inside denim jackets made by Levi’s and a YSL backpack with connected features.

You can expect that tag to last for three 90-minute matches before you'll need to plug it back into the charger. It looks like this:

GMR hooks up to EA Sports’ FIFA Mobile game (not the console version) where current Ultimate Team players can start unlocking rewards to bolster their teams. Or you can just start from scratch.

If you’re delving into the realm of FIFA Ultimate Team for the first time, picking up the GMR will instantly give you some added firepower. After the setup, and completing some in-game training drills, you are presented with a gift in the shape of the diminutive Argentina and Juventus forward Paulo Dybala to spearhead your attack.

There are no restrictions on where GMR works. If you have a ball and somewhere to kick it, that’s all you need. You don’t have to play in your weekly 5-a-side game, as it also works for solo play.

Struggling for space? FIFA Mobile hosts weekly GMR challenges based around your home. So passing the ball against a wall 75 times or taking out the rubbish with a 40m sprint will score you points to give your Ultimate Team an extra skill boost.

Climbing up the table

Along with bolstering your Ultimate Team squad with big name players, there’s also the small matter of topping the weekly leaderboards. There aren't just global leaderboards either.

You can also choose to compete against other GMR-owning friends in your own league leaderboard, and smaller group leaderboards, to increase your chances of cementing top spot. If you are sitting pretty in the silverware spot, you’ll be rewarded with more goodies in the mobile game.

The Adidas GMR does feel like something made for younger football fans, simply because it works on FIFA Mobile and not the full console game. There are some question marks over accuracy of tracking and there’s a bit of back and forth between apps to sync. It would also be good to be able to view your stats outside of FIFA Mobile.

Still, there’s nothing else like it out there. And at £30 GMR won't break the bank. The ability to wear the sensor in any footwear is a big plus, while the home challenges are definitely welcome given current events.

If you like the idea of racing to your fridge with a ball at your feet, to earn enough points to snap up a Sancho, the GMR is a good bit of footballing fun.