The zombie movie has a lot of surprising tidbits. 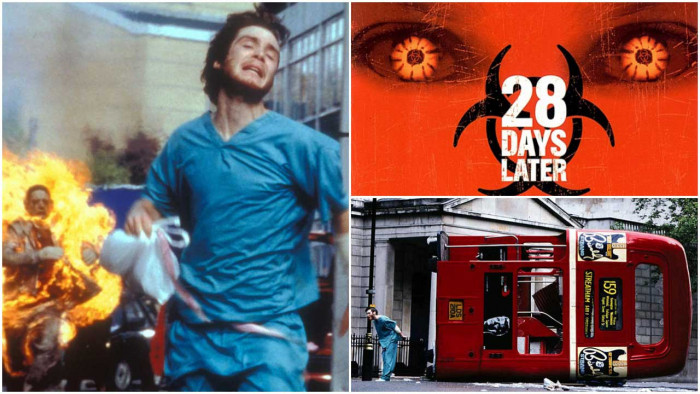 After nearly two decades, 28 Days Later has quite rightly earned its place as one of the best zombie movies of all time - as well as giving us a glimpse of what a deserted London would look like after a pandemic hits. An image that's is scarily familiar to us all now, post Covid.

It's hard to remember a time when zombies weren't infecting both our big and small screens but before 28 Days Later in 2002, they'd been relegated to B-movie hell since the 80s It took a tiny budget and a daring reinvention of the genre (they run!) to reignite our love for the living dead which led to World War Z, Shaun of the Dead, The Walking Dead and many many more.

UPDATE: This year, 28 Days Later is 20 years old. The zombie movie changed the genre for the better and marked Danny Boyle as one of the most inventive directors around, something that is still true today. There is still talk that we will get another sequel to the movie but we can't see how it can be better than this scary low-budget gem.

The movie spawned a sequel, 28 Weeks Later which doesn't have the power of the first movie but is still a decent movie. Also, Danny Boyle has revealed that there is a new 28 Days Later sequel in the works. In what would be the third film in the series, Boyle believes he has a great idea for the new movie, noting to The Independent: "Alex Garland and I have a wonderful idea for the third part," he said.

"It's properly good... The original film led to a bit of a resurgence in the zombie drama and it doesn't reference any of that. It doesn't feel stale at all. He's concentrating on directing his own work at the moment, so it's stood in abeyance really, but it's a you-never-know."

Until that happens, here are 12 things you might not know about the surprise horror hit, which is one of the best movies of the 2000s.

Megan Burns, who played the young girl Hannah, tried to reinvent herself as a goth singer called Betty Curse. Her highest charting entry was at #116 in the UK charts. She was last seen in the shorts movie In2ruders.

The mansion was actually Trafalgar Park near Salisbury. The scenes upstairs were shot downstairs, as the owners lived upstairs.

3. Day of the inspirations

Rather than associating it with other zombie movies, writer Alex Garland's original inspiration was The Day of the Triffids, a book by John Wyndham that was made into a film in 1963. It tells the tale of a species of plant that starts to take over the world.

Danny Boyle cast athletes as the zombies so you could "sense the power" within them.

How did they manage those incredible deserted scenes of London on a £5 million budget? Police closed the roads at 4am and shooting started immediately. To prevent angry drivers, Danny Boyle used attractive young women, including his daughter, to make the requests. Let's be honest, in 2021 it's a little easier to find deserted parts of London.

Ewan McGregor was the first choice for the main role and after that didn't work out, Ryan Gosling was the next choice but he had a scheduling conflict.

7. And so did Robert Carlyle

Robert Carlyle was offered the role of Major West that ended up going to Christopher Eccleston. Carlyle then ended up starring in the sequel 28 Weeks Later.

Naomie Harris and Danny Boyle worked out a back-story for her character that was never used in the film. Apparently she was hardened by having to kill her infected parents in order to save her baby brother, who she then found out was also infected.

James McAvoy auditioned for a role in the film, except it wasn't for the role he thought it was."I thought I was going up for one of the leads but it actually transpired that I was actually reading for a featured zombie," he revealed. "I was like, "Brilliant! Bring it on. It has come to this. I've made it… all the way to the fucking middle." It said I could do acrobatics on my CV, so Danny said "Can you do a back-flip? I want to see." He was trying to figure out how the zombies might move. So I gave him a back-flip, chatted for 20 minutes and never got the part."

The film inspired a series of comics as well as a graphic novel called 28 Days Later: The Aftermath. The comics follow Selena as she lives in a refugee camp in Norway.

There was a rather depressing alternate ending that saw Cillian Murphy's character die in an abandoned hospital. It was reshot as test audiences found it too downbeat but attached to US prints as an Easter egg late in the run. You can see it here.

Talk of a third film, after the slightly disappointing 28 Weeks Later, has existed for years but just recently, there was an important update from screenwriter Alex Garland. “We’ve just started talking about it seriously," he recently explained. "We’ve got an idea. Danny [Boyle, his long-time collaborator] and [producer] Andrew [Macdonald] and I have been having quite serious conversations about it so it is a possibility. It’s complicated. There’s a whole bunch of reasons why it’s complicated, which are boring so I won’t go into, but there’s a possibility.”