You’re not a footballer, but you could probably take a better penalty than this 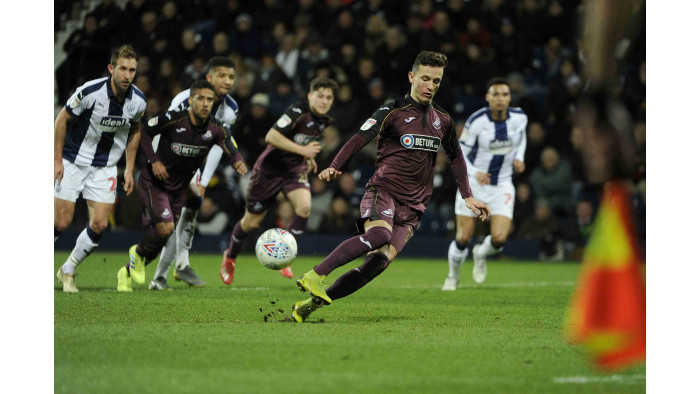 The world of football has been kicking it up a notch lately when it comes to physical comedy.

We saw Notts County goalkeeper Ryan Schofield commit a schoolboy error in his team’s win against Carlisle, while, on a broader scale, Paris Saint-Germain and Real Madrid both hit the self-destruct button to suffer objectively hilarious Champions League exits.

It can happen to those at the top of the game, those lower down the pyramid, and those somewhere in the middle like Swansea City midfielder Bersant Celina.

Celina is a Kosovo international footballer, and played a few times for Manchester City earlier in his career, so by most metrics he’s pretty good.

The 22-year-old has scored five goals for Swansea since joining the Welsh club over the summer, but he should really have six by now.

The reason he doesn’t? Well, it’s only the worst penalty we’ve seen from anyone since Thierry Henry and Robert Pires ballsed up an attempted one-two from the spot all those years ago.

We might not be penalty experts, but we know the ball is meant to end up closer to the goal than it was before you kicked it.

Yes, he clearly slips, but that doesn’t stop it being funny.

The worst thing about it was Swansea were just 1-0 down at the time. After missing the chance to equalise, they went on to lose 3-0 to a West Brom team that went into the game with no manager and no home wins since Boxing Day. Oh dear.