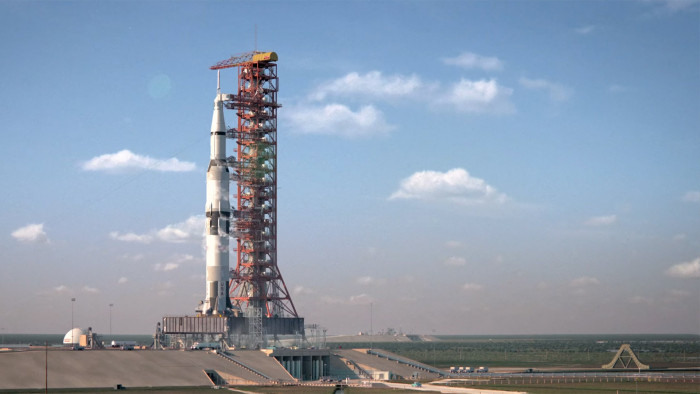 Apple has released the first trailer for one of its flagship Apple TV Plus shows and the platform is shaping up to be a serious Netflix rival.

Netflix has pretty much cornered the ‘Originals’ market. From reality shows like Queer Eye and Tidying Up with Marie Kondo to grittier series like Stranger Things and Russian Doll, the platform has churned out fantastic content for several years. Remember when Bird Box hit 26 million viewers within its first week online? Impressive stuff.

And as the streaming market broadens, so does the potential for brilliant original TV shows – which the first trailer for Apple TV Plus’s Originals vertical looks to confirm. The trailer was unveiled by Apple CEO Tim Cook at the World Developer’s Conference in California: "I got an early look at the entire season and I loved it," he said.

For All Mankind seems pretty standard at first. A man is about to step on the Moon for the first time. American people watch with bated breath. It looks, in short, like a compelling but basic historical drama with high production values and superb attention to detail.

But as the teaser progresses, you realise things aren’t quite as they seem. In fact, in a twist you already know if you’ve just watched the trailer, the series is actually set in an alternative universe where the Soviets were the first to reach the moon.

It has good credentials, too. Ron Moore, who also worked on Star Trek and the Battlestar Galactica reboot, is running the show. We don’t know much more at this point – including when it’s set to be released – but the teaser has certainly got us excited.

Apple has also been somewhat secretive about what else might feature on the platform, but we do have a few sneak previews. Dickinson, a show about the poet Emily, will star Hailee Steinfeld, and The Morning Show, a drama series, will star Reese Witherspoon, Jennifer Aniston and Steve Carell.And if you can’t wait until then, here’s our list of the best Netflix TV shows to stream right now.