This KFC dating sim is a real thing and coming soon

Pluck up the courage to find the right person 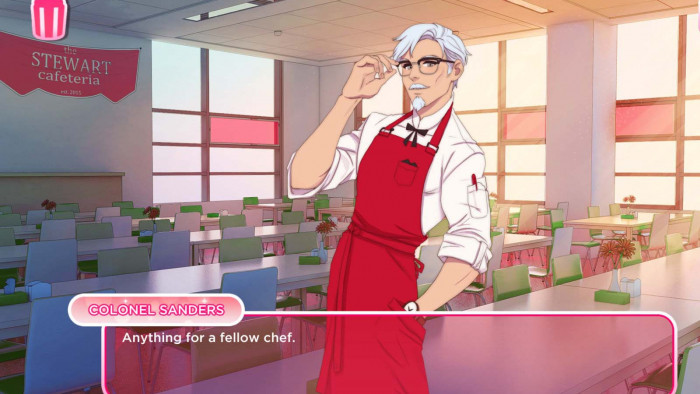 If you’re the sort of person who used to love making their Barbies and Kens kiss, you’ve probably grown up to be someone who enjoys dating sims.

If you’re not familiar with them, they do pretty much what they say on the tin – you play a character navigating the world of dating, making numerous choices on your road to a relationship (or, in the case of the saucier versions of the games, sex).

I Love You, Colonel Sanders! A Finger Lickin’ Good Dating Simulator, about to be released on Steam at the end of the month, sees you play a cooking student attempting to get in the pants of your classmate – who, yes, as we’ve said, is literally Colonel Sanders.

“Throughout your journey, you’ll be faced with life-changing decisions that will affect your chances of friendship and love,” the game’s description reads. “But be careful! Your choices have real consequences with real animated characters’ feelings at stake.”

“Do you have what it takes to survive culinary school? Will Colonel Sanders choose you to be his business partner? Or maybe even so much more? Find out in the most finger lickin’ good dating simulator ever created.”

Perhaps even more weirdly, the game’s page on Steam seems to suggest that the game was created by KFC itself – an unusual marketing ploy, but quite possibly a brilliant one.

about Colonel Sanders himself. We won’t ask, don’t worry.

No, we can’t guarantee there are any other opportunities to woo a fried chicken magnate, but we do have the lowdown on the best online games available now.