There's a new hot sauce that mimics a spider's bite

When will this end? 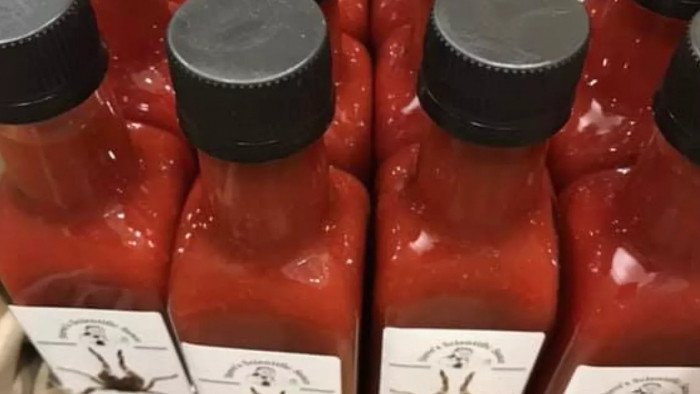 There’s now a hot sauce that is so…hot, that it mimics a spider’s bite. Is a spider’s bite hot? I’ve got no idea. In the eternal quest to harm ourselves through heat (why else would anyone ever order Extra Hot at Nandos?) a company called Venomtech - which definitely sounds like something a villain would work for in a superhero film - is behind the technology, made by Steve’s Scientific Sauce (seriously Steve, up your name game if you’re working with Venomtech ffs).

Scientific Steve’s Venom Chilli Sauce (OK, better) mimics the effects of the Trinidad Chevron tarantula’s bite, which apparently gives victims ‘muscle spasms and burning pain’, so why wouldn’t you want a dose of it on your oyster?

In the biggest relief so far, the sauce uses a synthetic venom, and no deadly spiders have been….milked(?) to create this sauce.

Managing Director Steve Trim (we assume the previously mentioned scientific one), said “It’s as best as we can manage without actually tasting the venom. It’s a similar heat component that the venom would cause.”

So there you go, if this isn’t enough of a hit for you, why not book a trip to the Amazon, get naked, and hope for the best? Or better yet, cut your foot and wade into shark infested waters, for that real ‘shark bite’ feel we all crave when our food just isn’t spicy enough.

If you’ve read this article and you’re thinking ‘Yes please! I’d like to try that!’ - firstly, are you mad? But secondly, you can buy it HERE for just £6.50. Happy spasming!