Sony has made a 63-foot-wide television

Hopefully nobody loses the remote 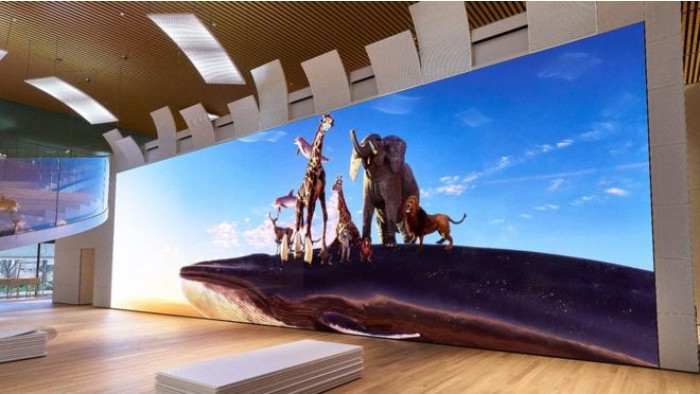 If you ever wanted to create a giant replica of the Starship Enterprise’s bridge in your living room, Sony has just provided the screen. But you may need to seek planning permission for an extension, given it’s longer than your average bus.

At 63ft by 17ft, this is comfortably the world’s largest 16K television set, although it’s not like there’s much competition. 4K-resolution screens are only just beginning to become the norm, and it’s not like there’s a huge amount of content available for them at present. Suffice it to say you won’t be watching Emmerdale in 16K’s glorious 16,360 x 8,640 for many decades to come.

In fact, nothing is currently shot in 16K. Sony has had to create its own film for the demo unit, showing life-sized animals going about their business. It might just have been easier to make it a glass window, and bribe a local zoo for actors instead.

Just like how it’s always a little disappointing when you find out an extra large chocolate bar is in fact made up of a bunch of regular ones, Sony’s screen isn’t quite as satisfying as it seems either. It’s actually a set of modular panels linked together, but because they’re bezel-free, they have the illusion of being a single screen.

That’s not the only achievement here, though. Sony uses “Crystal LED” tech, which is its fancy term for micro-LED display technology. This doesn’t need a backlight, but manages to go a lot brighter than existing OLED panels while not sacrificing the depth of blacks.

The demo unit was built for Japanese cosmetics group Shiseido, and is on display in Yokohama. It’s not for general sale, so there’s no price tag attached – but for the avoidance of doubt: no, you can’t afford one.