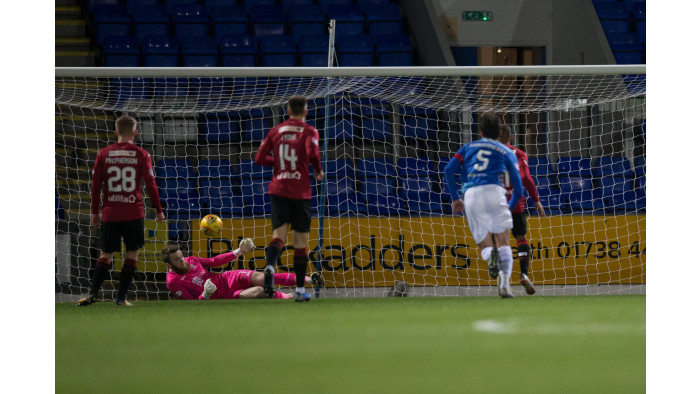 Any football fan worth their salt will know a Panenka penalty is one of the most disrespectful things you can do on the pitch, and therefore one of the best.

Whether you do it during a penalty shootout or at a crunch moment in a big game, the sight of one of these coming off has few equals.

Part of its brilliance comes from the absence of a middle-ground. Either it’s brilliant or it’s the worst thing ever, with nothing in between.

Which brings us on to Simeon Jackson, the Canadian international footballer who plays for St Mirren in the Scottish Premiership.

The striker was on penalty duties during his team’s big game at St Johnstone, earning a chance to put his team ahead and help them take a huge step towards avoiding relegation.

You’ve probably figured out that, had he scored, you probably wouldn’t be reading about him. The same goes for if he’d missed in normal circumstances, rather than somehow hitting a chip which barely leaves the ground.

However, Jackson is only one of the stars – top billing goes to the commentator for a phenomenal display of exaggeration.

“That is ridiculous,” the broadcaster says, with such urgency that you can almost hear him push past his colleague to deliver his condemnation.

Jackson is accused of “trying to be smart and clever” – as we all know, the goal of football is to be “dumb and stupid”, right?

St Johnstone took the lead soon after and held on for a 1-0 win, condemning the visitors to defeat and leaving them bottom.

Jackson has a chance to redeem himself in a bottom-of-the-table clash against Dundee, and he has only one way to make things up.

That’s right, he needs to try a Panenka again, and this time make it work. It’s the last thing anyone will be expecting.