Samsung’s latest smartwatch is a delight to use, sleek to look at and brings back the rotating bezel. 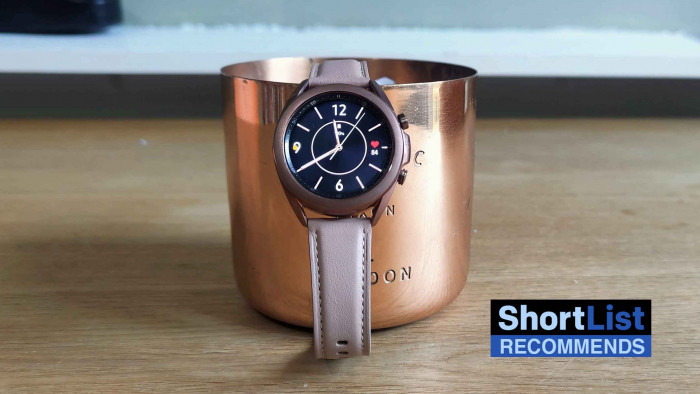 The Samsung Galaxy Watch 3 proves that Samsung is serious about smartwatches, delivering a device that’s packed with enhancements on the inside and refinements on the outside.

Back is the rotating bezel - missing from the Galaxy Watch Active - and the fitness features have been upgraded.

Specs-wise there is a lot of promise here, but can Samsung deliver, again, one of the best smartwatches on the market?

1. The Samsung Galaxy Watch 3 is designed for life

The Samsung Galaxy Watch 3 is a great-looking smartwatch, that packs its tech within the confines of a sturdy, sleek chassis.

Whereas its predecessor was a little on the chunky side and started to feel uncomfortable after a few hours’ wear, the Galaxy Watch 3 has been slimmed and trimmed. There’s a choice of bezel: 41mm and 45mm, which equates to a 1.2-inch (41mm) or 1.3-inch (45mm) Circular Super AMOLED screen. According to Samsung, it’s 14% smaller than the Galaxy Watch 2 and that shrinkage really shows in the 41mm version that we have been using.

Samsung has refined the rotating bezel, too, which is a delight to use, stripping off the hour markings so it is nice and smooth. If you opt for the Mystic Black variant, though, the bezel does have some ridges.

Situated to the right of the bezel are two buttons: the bottom one is to get you into your apps, the top to head back to the main home screen.

Colour-wise, there are a number of options. If you go big (45mm) then you have the choice of Mystic Black and Mystic Silver, the smaller variant (41mm) comes in Mystic Silver or Mystic Bronze - we went with Bronze and its more rose gold than Trump’s tan.

2. Fitness first, but you might want to change the strap

The amount of fitness features found on the Galaxy Watch 3 are impressive but what we noted when taking the watch on regular trips to the gym (when we were allowed back in, safely) was that the accompanying leather strap is something that you will need to consider changing.

It’s fine if you are going on the occasional run, but if you are looking to taking the device swimming (it’s IP68 water-resistant) then we’d recommend getting a silicon strap.

When it comes to tracking, the Samsung Galaxy Watch 3 is a joy, never needing prompting that you are doing some exercise. We lost count (thankfully the Watch 3 didn’t) of the amount of times we were walking briskly and the ‘we’ve detected your are working out’ notice popped up - usually about 10 minutes in, having already been tracking our steps. Given we are quite forgetful when it comes to logging out exercises this was a great, reliable feature.

In all there are 40 workouts that watch will track - ranging from walking to swimming to cycling. Not all of them kick in automatically, though, but the main ones certainly do.

We tried the watch while running and there’s a great running coach feature that tells you whether you need to be speeding up or slowing down on your jogs. It even digs into this even more after a run, looking at your running technique and for ways to improve.

3. Stress and sleep are well catered for

Setting up things like steps goals was easy through the watch and it does pretty deep with the data it offers.

There’s stress tracking (it’ll warn you if your heart rate is rising when it shouldn’t be), fall detection from the off, and SpO2 monitoring (sleep apnea detection) and VO2 Max (blood oxygen levels) to come. It will also track your periods.

Sleep tracking is also a big thing and can be done, in a basic way, without wearing your watch to bed - it will analyse the last time you looked at your phone and when you pick it up and take an average from that which you can log. Wear the watch, though, and the data is detailed with Samsung offering up a sleep score.

4. There’s a battery and processor surprise

Interestingly, Samsung has opted for a smaller battery in the Galaxy Watch 3 - we're guessing this was to make way for a slimmer chassis. This means that the Watch 3 certainly isn’t the longest-lasting smartwatch on the market.

We managed, on average, three days’ use before charging - this is similar to the Samsung Galaxy Watch Active 2 which has the same battery inside. If you are going heavy on things like music listening, fitness tracking and messaging then expect this to shrink by another day.

The charger is quick to use, though, so we didn’t have any real problems when it came to the watch going dead on us.

While it doesn’t have the same battery as the Watch 2, the processor is the same. Again we didn’t have any problems when it came to performance. When it comes to RAM, there's 1GB on board and 8GB of storage but nearly half that is taken up with the apps and the like that come pre-installed on the device.

Tizen (the operating system) is decent to use - except for a few apps that are missing (there's no Google Maps, for instance), it feels like you are using Android Wear and important apps like Spotify are readily available for Samsung’s OS.

5. You pay a premium for what you get

We don’t have an issue with the Samsung Galaxy Watch 3 price but it is at the premium end of the smartwatch scale. Bought from Samsung and it's £399. Compare this to the recently announced Apple Watch Series 6 and it's a similar price. You do get a lot of technology for the price, so the biggest concern you will have when choosing is whether you want to go down the Apple route or stick with Samsung.

Given the Samsung Galaxy Watch 3 works well with both the iPhone and Android devices, it is certainly worth considering - especially if you are a fan of your smartwatches actually looking like watches.

Samsung has created another brilliant smartwatch. It's more refined that its predecessor and the software enhancements are welcomed.

The sleep and stress tracking work well and it's one of the best smartwatches we've used for automatically recognising you're doing exercise (and the right exercise at that).

The Samsung Galaxy Watch 3 is a sleek and stylish Apple Watch alternative, and a smartwatch all Android users should consider.