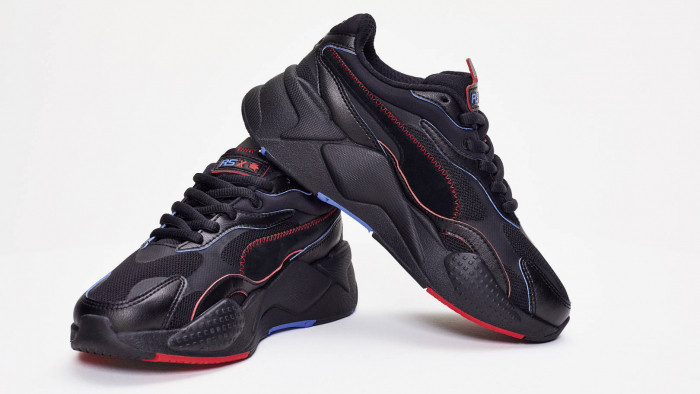 At Shortlist, there’s nothing we love more than presiding over trainer collaborations. More often than not there’s a Star Wars connection, however, this latest sneaker offering from Puma sees the brand channel none other than speed demon Sonic The Hedgehog.

Set to fly off the shelves at Sonic speed (which averages at 765 miles per hour, apparently), the trainers will boast a Puma RS-X3 silhouette and feature distinctive upper and sole detailing.

The launch follows in the footsteps of the Sonic-inspired Puma RS collaboration, which hit shelves back in 2018.

Don’t be fooled however, these kicks are more than just a gaming novelty.

A predominantly black design, the trainers feature purple and blue highlights alongside other fine sonic-themed details.

Eagle-eyed sneakerheads might spot the golden ring counter detailing as seen in the video game, whilst the life counter can be spotted on the shoe’s midsole.

The news coincides with the release of a new-and-improved trailer for the forthcoming Sonic The Hedgehog film. Set to hit screens in February, the initial trailer outraged many fans due to Sonic’s obscure appearance, sharp teeth and non-textured fur.

It was pretty the ultimate make-under.

Puma even took to Twitter to hint at the collab by sharing the trailer for the soon-to-be-released film.

Forming part of the forthcoming Sonic The Hedgehog capsule collection, the trainers will be joined by a range including a t-shirt, hoodie, crossbody bag and a beanie.

Priced at $120 (around £92), the Sonic The Hedgehog x Puma RS-X3 trainers will launch on 21 November on the Puma site. They’ll then be joined by the rest of the range on 7 February to mark the film’s release.