For that someone who *really* likes fried chicken. 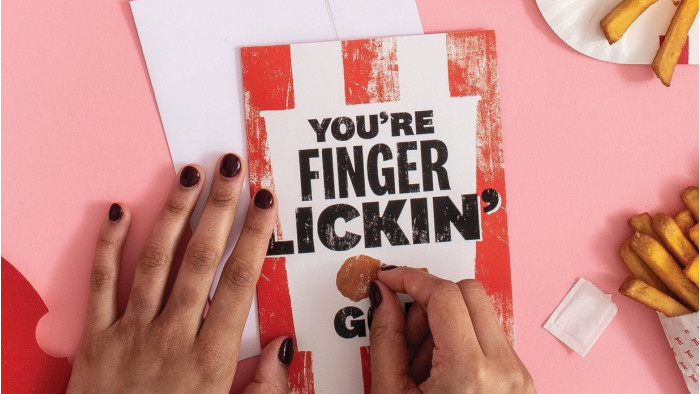 There’s no holiday that quite brings out the novelty like Valentine’s Day. It’s the only time of year where we think it is acceptable to give a grown adult a teddy bear.

And if you’re still yet to pick up a Valentine’s Day card, KFC has got your back.

Yes, the fried chicken gurus have teamed up with Moonpig to produce a range of chicken-themed Valentine’s Day cards, including a card that smells like chicken.

The ‘You’re Finger Lickin’ Good’ card gives pride of place to a chicken nugget, which when you scratch gives off the scent of fried chicken (yum?).

Unfortunately, the ‘Finger Lickin’ Good’ card is currently sold out, but here’s to hoping it comes back in stock soon and in the meantime, there are plenty of other KFC-themed cards to choose from.

There are seven other cards available, all of which feature some rather saucy innuendos.

With prices starting at £3.29, one card simply asks ‘Fancy a Peck?’ before giving you the chance to photoshop yourself (or your partner) into Colonel Sanders.

Another declares ‘I love you (almost) more than KFC’ before giving you a chance to write a heartfelt (and probably chicken-related message of adoration).

It has even thought of the vegans with a ‘Will you be my Vegantine?’ card that can be personalised featuring its new vegan burger.

And, if you weren’t already sold, you’ll be pleased to know that 10% of the proceeds are being donated to the KFC Foundation, which helps students who otherwise couldn’t afford their education.