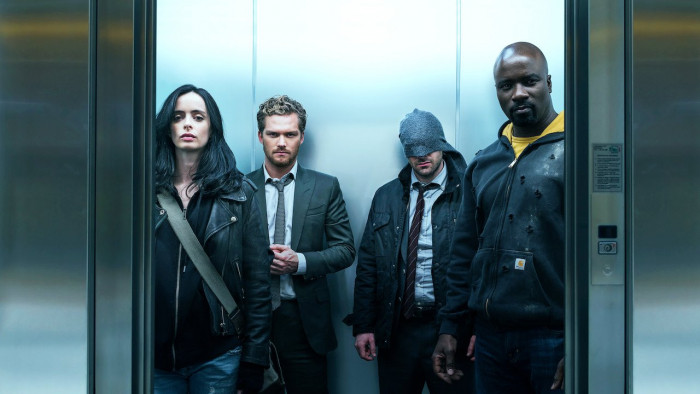 The time has come: Netflix no longer has the rights to Marvel's much-loved TV shows, meaning that, for now, there is nowhere to watch the likes of Daredevil, Jessica Jones, Luke Cage and more.

Netflix has had a number of Marvel shows on its service since 2015, when Daredevil debuted. The show was an instant success for the service and was a big drive for subscribers.

The shows were made by Marvel Television and ABC Studios and were seen to be part of the sprawling MCU - although we have only recently seen some of their characters make the shift over.

Daredevil ran for three series in all, with Charlie Cox playing Matt Murdoch and the brilliant Vincent D'Onofrio as Wilson Fisk, aka The Kingpin.

The show was swiftly followed by the equally ace Jessica Jones (which had two seasons), Luke Cage (also two seasons) and Iron Fist (which only made it to one season). Like the MCU movies, the shows were seen as interconnected and built up to The Defenders which starred all the superheroes but was a bit too lacklustre for our liking.

Another show was spun off from Daredevil and that was The Punisher which lasted two seasons but was not part of The Defenders mini series.

While the quality varied, there's no doubting that they were some of the best Marvel TV shows we have seen.

Since the rise of Disney Plus, it was always thought that these shows would eventually make their way to the service, but there were a few issues with this. The first, and most important, was the rights issue.

Netflix had the rights to the shows until March 1 2022, which is why it no longer hosts them on its service. The second was the adult nature of the shows. Daredevil pushes the boundaries when it comes to comic-book violence, while the excellent Punisher smashes through those boundaries.

Disney has now added mature content on to its service, though, through its Star on Disney Plus section. It's here that adult-only shows, such as Pam & Tommy, reside. It has also ramped up its parental controls to make sure that the wrong shows aren't seen by younger viewers.

This means that these Marvel shows are now ready to land on Disney Plus globally, but when will we actually see them?

Netflix Marvel shows on Disney Plus

Well, the good news is that Disney has just announced that it will welcome these shows on to the Disney Plus service in March.

"Disney+ will add more Marvel live-action series titles to the UK and Ireland platform, including Daredevil, Jessica Jones, Luke Cage, Iron Fist, The Defenders, and The Punisher. Which will be available from the 16th of March," says the release.

Disney had previously confirmed that the shows will be coming 16 March in Canada, too.

Unfortunately, it has yet to confirm what is happening in the US, but the UK release does note: "These Marvel series will also be available across all other Disney+ markets later this year."

The news comes as the promotional campaign for another Marvel TV show hots up. The Moon Knight build-up is happening right now with this rather excellent new poster.

While you wait for the Marvel shows to head to Disney Plus, have your vote on who is the best Avenger.

Please note: this story has been updated with the news that Disney Plus will welcome more Marvel live-action TV series from 16th March.