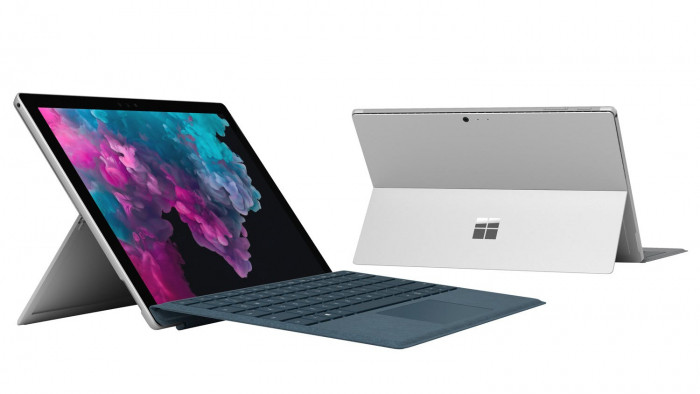 As a panel of Microsoft’s leading designers and developers assembled at the brand’s flagship store on Regent’s Street, the full range of new Surface products were on display for all to see - from the Microsoft Surface Pro X and Surface Pro 7 to their new venture into the world of Surface Earbuds.

The panel - consisting of Panos Panay (Head of Devices), Ralph Groene (Head of Design) and Kait Shoeck (Senior Industrial Designer) - took to the stage to discuss the latest Microsoft innovations on offer - alongside what to expect from the brand’s forthcoming Neo and Duo dual screen offerings.

What’s clear is that Microsoft aren’t trying to create ground-breaking products that are set to change the world as we know it. Instead, they’re attempting to create products that span the varying needs of consumers - from entry level tablets through to functional devices that are built to last. “Our products are a reflection of the people who make them,” declared Panay. “We’re proud because we have a device for everyone.”

Available to pre-order from Microsoft's online store, the tablets are the latest offering from the brand - with the Pro X starting what we expect to be a higher-priced range of its own. So, without further ado, here’s a run-down of the things we learnt from the showcase:

The Surface Pro 7 integrated keyboard speaker is a winner

Featuring front-facing 1.6W stereo speakers, the Surface Pro 7 boasts Dolby Audio Premium certification and the overall listening experience is a unique one. Located beneath the Pro 7’s keyboard (be warned, vibrating keys is a strange sensation), the speaker diffuses sound towards your face - rather than it being aimed into the desk or churned out across a limited field.

The stereo effect is an immersive one - but it might take some long-term use to decide whether the vibrating keyboard becomes a tad annoying. As for the power, it's not quite blow-your-hair-from-your-face level volume, but then again that's not what you'd expect from this Pro 6 upgrade.

However, when it comes to the Surface Pro 7, not a lot else has changed

At first glance, the Surface Pro 7 appears remarkably similar - if not identical - to its predecessor. The only noticeable change to the brand’s tried-and-tested formula is the mini-DisplayPort which has been replaced by a Type-C USB connection. In simple terms this means it will be able to use a wider range of docks, as well as Full HD monitors.

In terms of charge, the model can go from empty to 80% in an hour - pretty impressive. However, there’s still no sign of a Thunderbolt 3...

Microsoft have become known for their lack of visible screws - something many brands have employed in an attempt to compete with Apple’s sleek, minimalist look. It’s a feature that’s particularly noticeable with the Surface Pro 7's micro SD card slot.

Following on from Microsoft’s service-ability pledge, the barely-visible screws underneath the Surface laptop are drilled all the way through the chassis. What does this mean? Well, as soon as they’re unscrewed, you can remove the top of the keyboard and easily access the hard drive. Internal parts are easily accessed and the final product remains pleasing on the eye.

Complete with an even thinner bezel than the Surface Pro 7, the Pro X is ultra-slim in its design that sets out to compete with the iPad Pro. This next-gen product has realistically started a new higher-tier product range with a price point to match.

Featuring Microsoft’s SQ1 chip, the 2-in-1 device seemed to handle everything we threw at it. It’s light, it’s sturdy and the pen - whose flat design leaves a fair amount to be desired on the ergonomic front - automatically rotates itself using magnets to ensure it’s securely held in place.

Microsoft are Focusing on ‘Service-ability’

What can only be described as a subtle dig at Apple’s keyboard service-ability issues, Microsoft claim that increased focus has been placed on long-term use and easy repairs in response to customer feedback.

When it came to the new range of devices, Panay noted the brand “make sure a product is serviceable” - as opposed to requiring it be shipped halfway around the world for repair. The devices’ designs mean that repairs can be conducted quickly and easily. According to Panay, the brand ultimately aims is to “solve a problem with no trade-offs”.

On the lookout for a tablet? Discover the best laptops for students 2019.

OnePlus is back with a flagship for the camera curious.
News

The PlayStation was a masterful gaming console, here are the best PS1 games.
Mobile