So rare, there's only two pairs of each in the world. 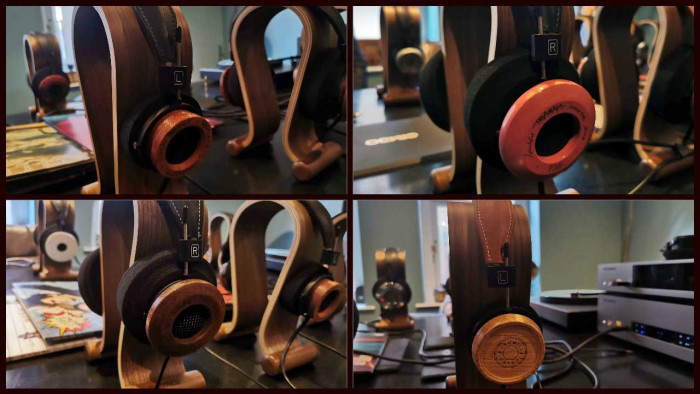 Grado is a headphone manufacturer that is coveted by celebrities. When a celebrity comes knocking on its door, wanting a pair of headphones, it makes them a pair - adding their name to them, and whatever other design flourishes they may want.

Sometimes Grado sells a version of them as limited edition headphones but, for the most part, they are unique to the celeb. In fact only two of each headphone is actually made. Why two? Well, if a celebrity breaks the first pair, there is a spare just in case. But that's it.

Given these are headphones made specifically for the A-listers - hand built in Grado's studio in Brooklyn - that request them, it's very rare that you would actually see them... except in paparazzi pictures and the like.

ShortList was pretty privileged, then, to be in a room with a selection of these headphones this week - surrounded by the 'spares'. We saw them up close and they are beautifully designed things.

We were shown them while audio taste-testing Grado's public-facing range of headphones. First up, we tried the Grado SR 80es. Part of the Prestige series, these are open back, and on ear, and sound way beyond their sub-£100 price range.

Then we tried the the Grado GS1000e. We put on a limited edition variant of these called the Grado White Headphone, which were made to celebrate the Beatles White Album and will only be available until the end of 2019. The sound was warm and crisp (they're made from maple), but there was a decent amount of oomph - DJ Shadow's bass line hit hard throughout.

The final pair we tried were the Statement GS 3000e headphones (RRP £1,615.50). These are jaw droppers. They are made from Cocobolo wood (rare) and the sound was simply spine-tingling.

But now to the celebs. Here are a selection of the cans we saw and the A-listers they belong to...

Pink's distinctive scrawl is all over these Grado headphones. Unsurprisingly, the colour of them is also, er, Pink.

We also were in touching distance of the pair that Arianna Grande has been given. These have been emblazoned with her name and also Reebok - she's been collaborating with the trainer company for a number of years now. A version of these was sold as a limited edition - with a fancy woven strap - but these are Grande's own and were given to her in January 2019.

According to Grado, John Mayer had been using Grado headphones to help record his albums so it wanted to thank him with this custom limited edition headphone. Matthew Grado (the Grado family's youngest son) gave the pair to John in person, back in 2014.

These ones were actually sold as a limited edition, but they have a celeb hook - they were designed in collaboration with Elijah Wood in 2012. According to Grado, it was approached by Bushmills to make a headphone out of their whiskey barrels - it did and the headphones sold out in a day.

5. A Grado for Gallagher

Now, seeing this one was a real treat - they have been made for Liam Gallagher and he hasn't even seen them yet! As you can see, they have his name and his partner, Debbie Gwyther, is on there as well.