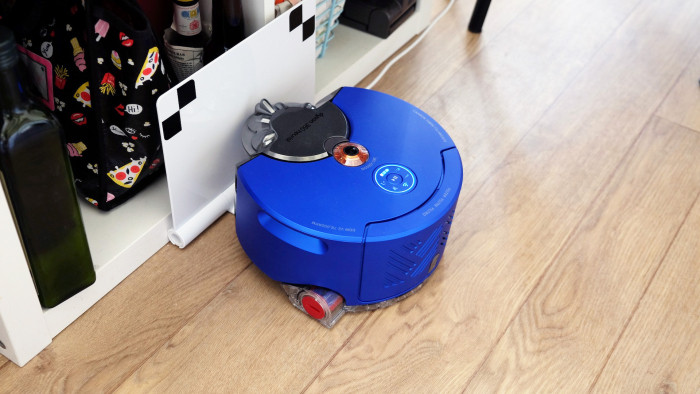 Dyson’s first robot vacuum cleaner (RVC) landed in 2015, after a long and laborious phase of testing and iteration. The resulting Dyson 360 Eye looked and behaved nothing like its rivals, packing a distinctive combination of desirable design and formidable suction power.

However, the RVC industry has moved beyond Dyson in certain areas and that can't be ignored, particularly when it comes to room mapping. Which brings us neatly, and most definitely cleanly, to the £800 Dyson 360 Heurist.

While superficially similar to the 360 Eye, Dyson’s second robot cleaner packs powerful new mapping technology that lets you clean specific rooms in your home. Throw in a chunky power boost and you have a stylish new contender for the high-end RVC crown.

Here are six things you need to know before buying the Dyson 360 Heurist.

The Dyson 360 Heurist is a striking bit of kit, with a brilliant deep blue finish. Combined with its squat dimensions (slightly taller than your average RVC, but with a lot less surface area) it looks like a luxury biscuit tin from a fancy London retailer. Aside from the colour, though, it looks much the same as the original 360 Eye. Dyson spent more than 10 years designing its first robot, and you’d better believe that all those R&D pounds aren’t being frittered away so frivolously on a brand new design.

That’s fine though, because Dyson’s RVC solution remains unique. Its deceptively compact size means it manages to get under our bed and through the forest of metal legs that is our kitchen table and chairs. Meanwhile its rugged tank tracks mounts deep-pile rugs without a struggle, which is more than can be said for some rivals.

Dyson’s uncommon decision to go with a full-length cleaning head, meanwhile, means that wherever Heurist roams it cleans. And its front-mounted circular bin is easy to remove and empty - though perhaps not quite as pleasing as the Miele Scout RX2’s lift-out ‘lunch box’ approach.

When we say the 360 Heurist is smarter than its predecessor, we’re not referring to that brilliant blue finish. We’re talking about the Heurist’s greatly expanded brain. The Dyson 360 Eye was a great cleaner, but it lacked the ability to scan and map its environment like the Neato Botvac D7, the iRobot Roomba i7+, or the Roborock S6. Every run was like its first, and you had no control over where it went.

With the Heurist, your first outing will be a pure mapping run. It scoots around, scanning every corner of your home. It will then report back with a recognisable floor plan via the slick Dyson Link app. You can then manually split the map into distinct rooms and label them accordingly. With this done you can instruct your Dyson to clean specific rooms and even schedule it to cover certain rooms on different days, which is ideal if you want to focus more on high-traffic areas like the living room and hallway. The ability to specify different power modes for individual areas is a novel touch too.

It’s also possible to set digital no-go zones if you have cables or fragile ornaments the Dyson 360 Heurist should avoid. And you can instruct it to lift its brush bar or avoid climbing (trying to mount low obstacles) in certain areas. You can still set the Heurist to spot clean too - just place it down in a mucky area and hit the Play button on the unit, and it will clean up the surrounding mess.

3. The Heurist has had a tech upgrade

In order to give the 360 Heurist a higher IQ, Dyson equipped it with a new quad-core processor backed by 8GB of flash memory, 32 times that of the 360 Eye. And even though it has lost that ‘Eye’ moniker, Dyson’s new RVC has gained a pair of depth-mapping time-of-flight sensors, so it can spot obstructions from even further away. Together with a new lens on its signature 360-degree camera and an LED light ring for dark areas, the Heurist is sharper eyed than its predecessor.

Underneath the Heurist, the bristles on its new brush bar are 100% stiffer and spin even faster than before, so dirt pick-up has improved considerably.

4. It’s way more powerful than before

The Dyson 360 Eye was hardly lacking in power, but the British manufacturer has equipped the 360 Heurist with an improved V2 motor running at 78,000rpm for 20 per cent more suction. It has three cleaning intensities to choose from - Quiet, High and Max - but they will all pick up the kind of fine dust particles most other RVCs simply won't.

While the new mapping feature of the Dyson 360 Heurist represents progress, we’re not sure it matches the best efforts of iRobot, Neato and Roborock for sheer navigation reliability just yet. Our first few cleaning runs failed to complete a clean of our entire flat. The Heurist got caught in a repetitive loop around a hallway doorstop. In two subsequent remapping runs, meanwhile, it missed out a large swathe of our living room and repeatedly reported a stuck track where there was none.

Our standard room-specific cleaning test, where we sent the Dyson out to clean our hall and kitchen, yielded mixed results. While it cleaned up certain problem areas much better than any other RVC we’ve used, it also missed out certain patches entirely, meaning that it ultimately picked up less of our test mixture than leading rivals.

On a second attempt, it took longer than its own 26 minute prediction to complete, necessitating a lengthy recharge for barely a couple of minutes-worth of work. It also came a cropper on a large kink in our office rug and the diagonal stand of our washing airer, necessitating a direct intervention. It would often get a little lost on its way back to base, too.

It’s worth mentioning the Heurist continually learns about your home, so it could solve these navigation issues itself over time. Even if it doesn’t, all it would likely take is a software update to improve matters. The aforementioned Roborock S6, for example, was completely cured of its own bad habits with an update.

6. It still takes its sweet time

The Heurist’s more powerful motor necessitated a switch to a more efficient battery, but cleaning time continues to be Dyson’s Achilles heel. In fact, a full-powered cleaning run of our modestly-sized two bedroom flat took upwards of six and a half hours.

That’s largely because the Heurist needed to go back and recharge three times during a run, each of which took an hour and a half. With between 40 and 60 minutes of run time per charge on the higher levels, it really stacks up. The Quiet mode stretches out to 75 minutes, and needs only a single recharge, resulting in a total clean time of around three and a half hours. Still hardly snappy.

The Dyson 360 Heurist is undoubtedly a more powerful cleaner than its rivals. But the fact remains most of those rivals take less than an hour to clean the same area, and they can comfortably do so in a single charge. Of course, if you’re out all day while it’s doing its thing, the more intensive clean that the Heurist provides will make this a moot point.

The Dyson 360 Heurist is the most potent robot vacuum cleaner we’ve used when it comes to raw deep-cleaning power, and its new mapping smarts add welcome flexibility. Its protracted cleaning time means it’s not the ideal RVC for those who clean on the spur of the moment or work from home, however, and there are a couple of mapping gremlins that need to be chased out of the system.

In terms of all-round competence and convenience, then, the Dyson 360 Heurist isn’t quite at the level of the solidly reliable Neato Botvac D7 or the markedly-improved Roborock S6 just yet, and both of those can be had for around half the money. But the Heurist’s peerless cleaning power, and the fact that it will only get better with time, puts it in a holding pattern just below its dowdy rivals.