Seven years after the show began, we finally have an official beer to watch it with. 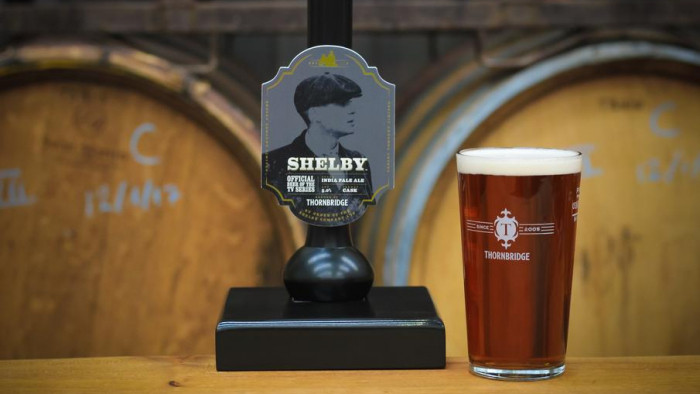 Since Peaky Blinders began back in 2013, there has been a flurry of official - and unofficial - merchandise based on Tommy Shelby and his family.

From the ever-growing pile of flat caps to whiskeys and gins, there’s no shortage of themed-goods, but we’re now getting our first ever ‘legitimate’ Peaky Blinders beer.

Derbyshire-based brewery Thornbridge is behind the IPA, having partnered up with media companies Shine Group and Caryn Mandabach Productions.

Having been named Shelby, the 5% ABV beer will be launched in Thornbridge’s new Birmingham pub, the Colmore, on 20 February.

Bottles of the beer will be available to buy more widely from March.

Thornbridge have supposedly done their best to create a beer similar to those that the real Peaky Blinders would have been drinking in the early 20th century.

By order of @ThePeakyBlinder we introduce Shelby, the official beer of the TV series. We are delighted to have crafted an English IPA we feel would be right at home on the bar of The Garrison. #PeakyBlinders#Shelby

According to the brewery, it has a fantastic golden amber colour “with a nose of stone fruit and red berries, a gentle maltiness on the palate and a wonderful citrus, lemon-pith bitterness.”

Now, fans of the show - and of beer - will already be aware of Sadler’s range of Peaky Blinder-inspired beers, which have been around since 2014, but the show’s creator Steve Knight has declared Thornbridge’s beer to be the only ‘legitimate’ one inspired by the show.

He added: “It has been crafted to be the same brew the Peaky boys would have drunk in the pubs of Small Heath. It really is the authentic taste of the Peaky Blinders world.”