This amazing 'dead leaf butterfly' is nature's greatest illusion yet

This makes no sense at all 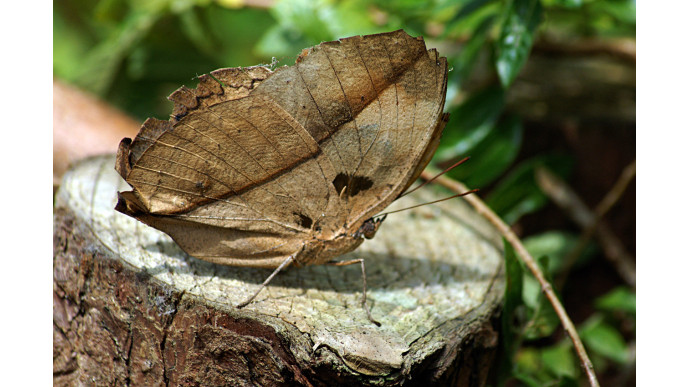 Evolution is a wacky, wacky thing. It’s vastly less wacky than any alternatives, of course – an all-knowing bearded dude creating everything is substantially wackier – but it’s still pretty dang wacky. Tiny changes happening over millions of years, being strengthened whenever they lead to a species’ increased survival, has led to some really gnarly stuff. Chameleons are pretty unlikely, and yet they’re real, so, like, whoa.

Is it too early to be smoking this?

Anyway, there’s a butterfly known as the dead leaf butterfly, because it’s evolved in a way that it can stay still and perfectly resemble a dead leaf. The Kallima inachus, also known as the orange oakleaf or the Indian oakleaf, is incredibly delicious to birds, and when chased will fly erratically and hide in a tree, flawlessly disguised as some past-it foliage.

Impressively leaflike, yes? Well, take a look at this video, which no matter how many times you watch it, still seems like it’s just a video of a dead leaf. Like, you know it’s a butterfly, but is it? Is it actually? It is. But is it?