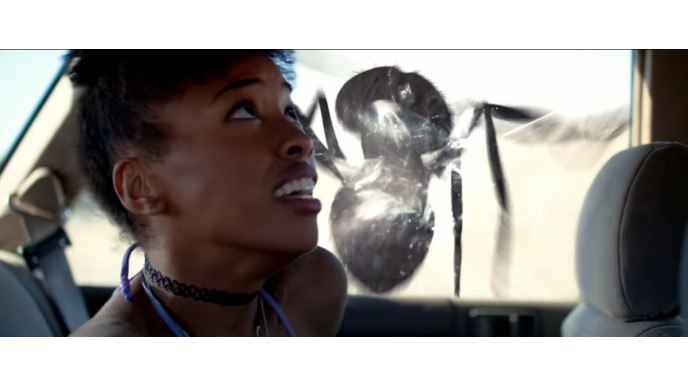 The modern B-movie is a bit of an odd duck. While older low-budget films made do with shonky Darkplace-esque effects, things on strings, obvious model shots and non-good actors doing their best, modern ones feature a lot more smirking self-awareness and oddly charmless bad CGI. Crap digital effects lack the appealingly handmade feel of crap practical ones, and nodding to the camera as if to say “Yes, this is crap, I know” feels at best like everyone trying to have a cinematic cake and eat it.

That said, despite having a lot of the hallmarks of the more disappointing end of the modern B-movie scale – appalling fonts, stunt casting, a really inconsistent tone and cheap-looking CGI – the trailer for Dead Ant is a lot of fun. The film sees an ageing ‘80s hair metal band caught up in a killer ant attack during a desert peyote trip. Here’s the trailer – ignore the terrible quotes at the beginning of it, especially the genuinely offensive second one:

That’s… a lot of stuff going on. There are cult movie stalwarts like Michael Horse (Twin Peaks), Sean Astin (Toy Soldiers, Lord of the Rings) and Jake Busey (Starship Troopers, being Gary Busey’s son so therefore a genuine oddball) alongside vaguely recognisable who’s-that kind of faces (including veterans of Silicon Valley and The Walking Dead) alongside near-unknowns (although fans of Netflix’s underrated Everything Sucks! will recognise Sydney Sweeney from that). Tom Arnold is certainly capable of being really funny, people being killed by big ants is inherently entertaining, and everything tends to be made better when everyone has silly hair and is wearing jackets with the sleeves removed.

Despite being shot in 2017, Dead Ant (which may or may not be a Pink Panther joke) is coming out at the end of the month on digital download. It’s probably, let’s be honest, not really worth it, but the trailer’s a laugh.