Confirmed: Marvel's next TV show isn't part of the MCU

Showrunner confirms that, with MODOK, he's allowed to do his own thing. 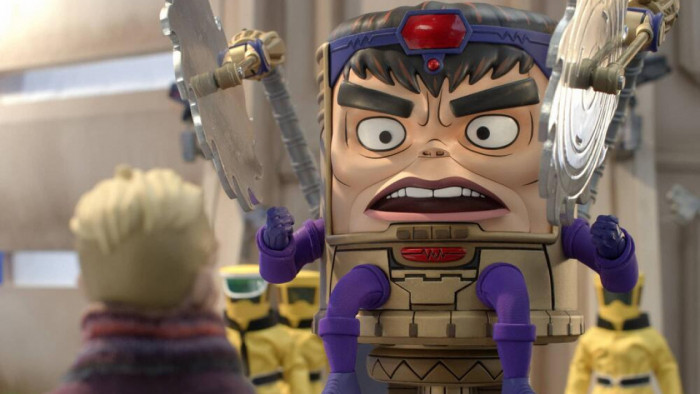 Marvel's MCU is 13 years old now. What began with 2008's Iron Man has become a sprawling spider web of interconnected shows and movies.

It's a franchise masterpiece, a shared universe masterminded by Kevin Feige that - with the arrival of WandaVision and The Falcon And The Winter Soldier - has shifted into its Phase 4 plans. But not every new Marvel show will have a share in this universe.

While many fans had hoped that Hulu's upcoming show Marvel’s M.O.D.O.K. - which is without a doubt one of the strangest Marvel shows yet - would have some connection with what's going on in Phase 4 right now, its showrunner Jordan Blum has revealed that it is its own thing, and why he is happy with this.

Speaking to ComicBook.com, he explained how he got to choose the universe the show is in and while it may not have the MCU badge of honour, Feige and the team are really happy with what they've seen of the show.

"We're our own universe. I think like, you know, Harley Quinn is a good example of like, that's not the movies, but it's really cool actually," notes Blum.

"Marvel has like a database of all the universes in the multiverse, and there's a guy who runs it and they let me pick the numbering of our universe. My son's birthday, 12/26, is our universe, so we were in the Marvel Multiverse, which is awesome."

He continues, saying those behind the MCU "really dug it and were really happy with the creative, and I think they saw that we were very respectful of, you know, everything that'd come before it.

"They really just let us do our own thing, you know and I don't think we ever really got any notes or anything from them. They were just kinda like, 'This is working, keep going.'"

M.O.D.O.K. has a brilliant premise. It's about a Marvel villain - a floating robot engineered head - going through a mid-life crisis, after he loses his job and has to face reality with his family.

Voiced and co-created by Patton Oswalt it's a sideways look at the character created by Jack Kirby and Stan Lee.

The trailer looks fantastic and if it has any of the dark adult humour of the Harley Quinn animated show (that Blum mentions) then we are in for a treat.

M.O.D.O.K. is a Hulu TV show which was always going to put its MCU credentials into question but not rule it out completely, given Runaways, Helstrom and Cloak & Dagger have some ties to the universe.