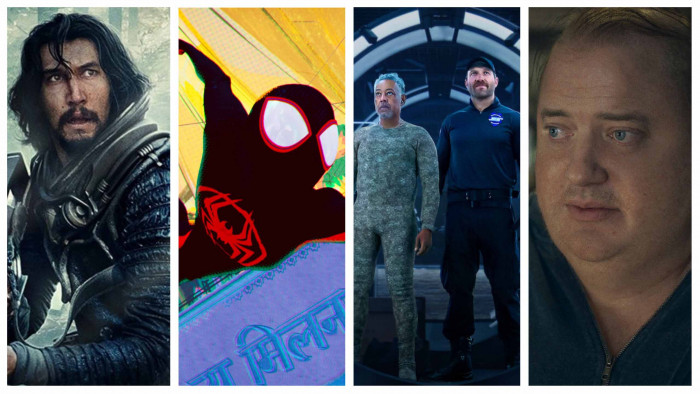 It may be nearing the end of the year, but there is no shortage of great trailers that tease upcoming movies that we want to watch right now.

Here we have chosen the five best trailers of the week - the ones that made us stop what were doing and watch on repeat.

From horror sequels hoping to be equals, a film that blatantly had 'Jurassic Park in space' as its elevator pitch and an Oscar contender, here are our pics of the best movie trailers you need to watch...

1. Spider-Man: Across The Universe

The sequel to the fantastic Spider-Man: Into The Spider-Verse is an ace look at the upcoming animated follow-up. While the tease doesn't give too much away, it does showcase Miles Morales as someone who is having to deal with growing up, while the Spidey universe is under attack once more. The animation on this one looks very special.

Well, this one is a pleasant surprise. Created by the writers of The Quiet Place and producer Sam Raimi, this space adventure sees pilot Mills (Adam Driver) crash land on a strange planet... only for it to be Earth 65 million years ago, complete with dinosaurs and other prehistoric adventures. This one has gone straight to the top of our 'must-watch' list.

While the last Scream acted as a sort of 'requel' to the rest of the franchise and was just called Scream, its sequel has taken on the digits and will be the official sixth instalment of the series. This time Ghostface and the survivors of the last movie - including Wednesday's Jenna Ortega - have all relocated to New York, which marks the first time we have seen the horror icon away from Woodsboro. Cue scary Subway scenes and lots of shots of big buildings.

Any Netflix Original you have to take with a pinch of salt quality wise, but we are a sucker for anything Giancarlo Esposito stars in and he is in this mini series, where a bunch of robbers try and take on the most secure bank vault in the world. The trailer makes it looks like an Ocean's 11 crime caper, with a more ragtag band of robbers - and we are all for it. Interestingly, it's eight episodes long but you can watch each episode out of order and the whole thing will still make sense.

After a huge amount of hype at the various film festivals it featured, Darren Aronofsky's The Whale is coming to the big screen, just in time for Oscar season. And an Oscar may well be in the air for star Brendan Fraser, who stars as an obese lecturer that tries to make contact with his estranged daughter, played by Stranger Thing's Sadie Sink. Expect a sea of tears when this one debuts soon.

Other trailers we have loved recently...

We had to start with this one. Directed by Elizabeth Banks, this true-ish tale is about cocaine smugglers who dropped a payload of the drug while on the run and the carnage that ensues when a bear who finds the stash ingests it. It looks a lot of fun and is the most matter-of-fact title for a movie since, well, Snakes On a Plane.

Indiana Jones And The Dial Of Destiny

Nope, we aren't convinced by the title either but the first Indiana Jones And The Dial Of Destiny trailer is a joy. Yes it leans heavily on the nostalgia and mythos of Harrison Ford's Indiana Jones but the new characters and old faces work well together and once the theme music kicks in, you can't help but smile.

Guardians of the Galaxy Vol.3

The third Guardians of the Galaxy chapter definitely feels like a movie that is ending the arc for these current Guardians. While the story is still under wraps, it's clear that the group are going back to their (g)roots, with Rocket and co looking to understand their past. The trailer also shows us a quick glimpse of Adam Warlock, played by the rather ace Will Poulter.

Transformers: Rise Of The Beasts

If, like us, your favourite Transformer movie is the one Michael Bay didn't direct (yep, that's Bumblebee) then you may well be interested in Transformers: Rise Of The Beasts. Directed by Steven Caple Jr, who did a fantastic job on Creed II, here he's tackling a bigger budget movie which sees the Transformers team up with robots who disguise themselves as beasts. It looks like this one will be based on the TV show Beast Wars, which will make some Transformer fans very happy.

Chris Pratt providing the voice of Mario is still a baffling decision - Mario's famed "Wahoo" sounds lacklustre in this promo - but the rest of the Mario animated movie looks ace. In the trailer there are nodes to Mario Kart, Mario's 2D platformer past and even Tanooki Mario.