When one screen just isn't enough... 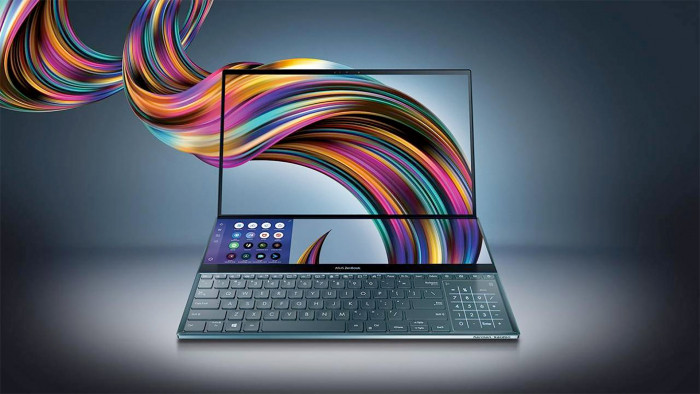 If you want some extra screen with your screen, then Asus’s new dual screen laptop is probably right up your street.

The new Asus ZenBook Pro Duo laptop has a 15-inch 4k touchscreen – and what it calls the ScreenPad Plus, a 14 inch so-called secondary screen. If that wasn’t enough for you, the trackpad, located on the right-hand side of the keyboard, also doubles as a number pad . It brings the total number of screens to three.

The laptop is specifically designed for multi-tasking. You can have a to-do list open while you work, a chat window as you play a game, or a video call open while you browse the web.

The rest of the ZenBook Pro Duo's specs are pretty good as well. Its main screen is a 15-inch 4K OLED panel, and the laptop can be configured to have up to an 8-core Intel Core i9 processor and an Nvidia GeForce RTX 2060 graphics card. It also has a Thunderbolt 3 port, two USB-A ports, an HDMI port and a headphone jack, as well as two big cooling vents, one on each side.

A smaller option, the Zenbook Duo, is also to be released. It has a 12.6-inch secondary screen but is much the same as its larger sibling.

These are not the only products with an innovative approach to screens. The ZTE Axon M from 2018 is a phone with two screens. It folds out like a book, and two apps can be run at once. Unfortunately this didn’t go down well with reviewers – tech site Pocket Lint acknowledged its good qualities but still referred to it as a “hot mess”.

And the Vivo NEX Dual Display Edition phone has a front and back screen, both HD, and incorporates several pop up cameras to boot.

As for laptops, HP launched a dual screen gaming laptop earlier this year to great fanfare. Again, this had the express aim to help you multitask – you can play a game with the main screen while using a smaller screen embedded in the body of the laptop to stream on Twitch or chat to friends.

The ZenBook has no price range or release date as of yet - we're definitely not expecting this one to be in best budget laptop price territory - but Asus has said it will launch the product later this year.