ASICS' new running shoe has an AI coach built inside: 6 things you should know 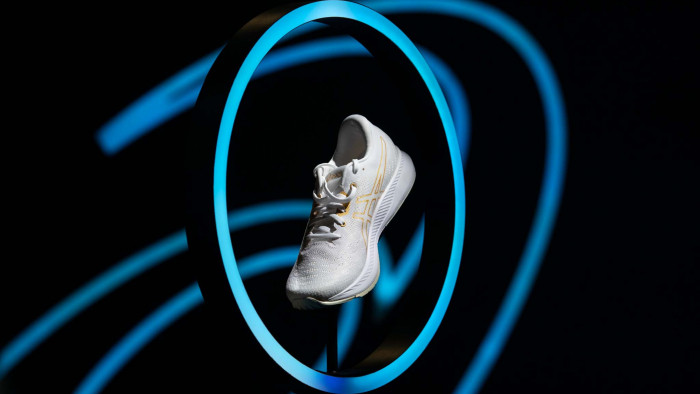 Not so long ago, it would have been strange to see a sports company like ASICS at such a huge scale technology event like the Consumer Electronics Show (CES). But due to the booming health and fitness industry and growing use of technology in the sporting world, an increasing number of athletics brands are finding greater relevance in the tech sphere.

This year marks the first time the Japanese footwear firm has made an appearance at the colossal tech event set on the Las Vegas strip - and it was with good reason. The company came to reveal its brand new smart shoe prototype, which makes use of AI to closely analyse your stride and coach you into running better.
Not so many mass market trainer brands have attempted to integrate such complex tech into their usual designs. Here are six things you should know about ASICS’ new smart shoe…

1. Runs are analysed via sensors to give actionable feedback

Packed with a bunch of multi-dimensional sensors, the smart shoes come in the form of ASICS’ EvoRide trainers but with an added bonus: they track a range of inputs of whoever wears them, including kick strength and stability, among others. This gives runners real-time feedback and actionable insights that will help them perform better and more efficiently.
This feedback is matched against datasets in the cloud, which ASICS’ CEO of the firm’s Institute of Sport Science (ISS), Kenichi Harano, said comprises data garnered from over 10,000 runners. Here, it cross references your output and gives you a score based on your running style and posture as well as which type of runner you are. It will also offer recommendations on how to improve and better your technique.

2. The sensor is self-contained and hidden

Called the Orphie Core, the sensor - which is responsible for measuring your running output - is actually a self-contained piece of hardware which is slotted into a specially-designed hole in the sole of the firm’s new EvoRide shoe. This means it’s not only hidden from sight, but it can be easily applied to future generations of ASICS footwear. It also means the smart trainers look exactly like standard Asics shoes as designs haven’t had to be drastically changed to cater for the new tech.

3. Asics didn't do it alone

ASICS have been very transparent about how they came to produce its new smart shoe. Not being experts in sensor and wearable technology, they partnered with a fellow Japanese company, a third-party startup called No New Folk Studio who are responsible for building the sensor technology and adapting it to ASICS’ needs.

While it won’t be available at launch, No New Folk Studio CEO, Yuya Kikukawa told Shortlist that a smartphone companion app is likely to be launched at a later date which will store all your run data among other cool things. At present, your output data is available as an evaluation via an infographic-style web portal. However, we were shown an idea of what the app will look like when it is up and running, and while only a prototype at the moment, is displayed all the stored data as a profile, with running maps, progress of improvement and many other insights. There was even a virtual reality speedometer which shows you how fast and far you are going, and can glance at it while you're on your run.

5. It's not Asics only new tech

ASICS’ smart shoes were unveiled alongside the company’s new Run Analyzer. This involves a piece of AI camera tech which analyses your run via a camera which is aimed adjacent to a treadmill. Taking a reading of your limbs as you run, the Run Analyzer tracks the movement of your limbs to see what the angle your ankle hits the ground and how changing this with ASICS footwear could better increase how efficiently you run. This is based on ASICS’ research that the lower the angle, the less energy is exuded during a run. It will then recommend the best type of footwear based on your results.

6. They'll be available by the end of the year

The EvoRide smart shoes will be available to consumers at some point this year, although when asked about pricing, we were told that this couldn’t be disclosed just yet. ASICS also noted that the EvoRide smart shoe showcased is a prototype and the sensor will be launching in a different shoe design.

Whether it be for fashion or fitness, get the best Adidas shoes for you.
News