Grab yourself a white Russian and take a seat, with these Big Lebowski facts 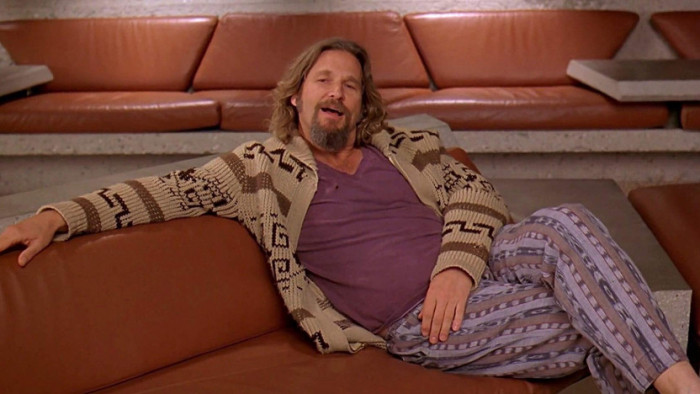 The Big Lebowski is a whopping 23 years old. Watch it now, though, and it hasn't aged a day. That's because it's such a critical movie, such a powerhouse of comedy and characters that its visuals are forever etched into our culture, its slacker attitude and looping plot emulated by hundreds of movies since.

Still, despite its age - there's probably a few things you still don't know about the Big Lebowski. So here lies 50 unknown nuggets from the Coen bros’ classic. And if you know them already then well, that’s just, like, your opinion, man.

It was the film that made us fall in love with White Russians, rekindled our love of bowling and turned Jeff Bridges into a shaggy-haired, dressing gown clad cult hero. And, 23 years since its release, we thought there’d be no finer way to rejoice in all things Dude than dig out 50 facts about the movie that even the most ardent Lebowski worshipper may not be aware of. Abide.

These are the best 90s movies of all time.

The line, "The Dude abides" is a reference to Ecclesiastes 1:4 in The Bible: "One generation passes away, and another generation comes: but the earth abides forever."

The film has spawned its own festival. Starting in Kentucky in 2002, Lebowski Fest has been held in such cities as Los Angeles, New York, Seattle, Chicago, London and Edinburgh. Jeff Bridges, John Goodman, Steve Buscemi, John Turturro and Julianne Moore are all previous attendees.

The Big Lebowski has even spawned a religion. Dudeism is devoted largely to the philosophy and lifestyle of Jeff Bridges' character and was founded in 2005. It has ordained over 130,000 'Dudeist Priests' via its website.

The Dude's rug being peed on is mentioned to 17 times throughout the movie. The fact that it "really tied the room together" is noted five times.

In the script's first draft, The Dude was revealed as the heir to the Rubik's Cube fortune. Joel Coen later scrapped the idea, choosing to leave The Dude's source of income a mystery.

The Dude's character is inspired by film promoter Jeff Dowd, who helped secure distribution for the Coen brothers' first movie. Like his fictional incarnation, Dowd was a part of anti-war group, the Seattle Seven, and has a relaxed attitude towards grooming and wardrobe.

A friend of the Coen brothers, Peter Exline, was also an inspiration for the film. It was Exline who coined the phrase "It really tied the room together", referencing his own rug, and also once found a schoolboy's homework in his car after it had been stolen, later confronting him with it.

Though Donny wears several personalised bowling shirts during the film, none of them bear his name.

The word "dude" is said 161 times during the film. It is spoken 160 times and appears once in text, during the credits for 'Gutterballs'.

When John Turturro’s character Jesus has a large bulge visible in his tight pants, it was formed by a bag of birdseed.

Charlize Theron was considered for the role of Bunny Lebowski.

Despite being part of the bowling team, The Dude is never seen bowling during the movie. Even in the 'Gutterballs' dream sequence it is Maude that throws the ball.

The $0.69 cheque The Dude writes for milk is dated September 11 1991, exactly 10 years before the 9/11 terror attacks. Even more spooky, George Bush Sr can be heard on the TV, making his "This aggression will not stand" speech, in reference to the war. The film was made in 1998.

When filming the briefcase scene, it proved impossible to get Walter's undie-filled case to be thrown correctly. Eventually this was shot in reverse, with a crew member throwing the case into the car as a stunt driver reversed at high speed.

16. from russia with love

Including the one he drops at Jackie Treehorn's house, The Dude drinks nine White Russians during the movie.

Keeping in the tradition of a film noir, The Dude appears in every scene of the movie. Even when the Nihilists are ordering pancakes, you can see the van containing The Dude and Walter drive past.

When weeing on The Dude's rug, one of Treehorn's thugs says "Ever thus to deadbeats, Lebowski." This is a reference to the Latin phrase, "Sic semper tyrannis", which means "Thus always to tyrants," which was allegedly shouted by the murderers of Abraham Lincoln during his assassination.

A lot of the Dude's clothes came from Jeff Bridges' own wardrobe. What's more, The Dude's oriental shirt was also worn by Bridges inThe Fisher King (1991).

Before scenes, Jeff Bridges would often ask the Coen Brothers, "Did the Dude burn one on the way over?" If they said he had, Bridges would rub his knuckles across his eyes to make The Dude appear stoned.

The F-word or its variations is said 292 times during the movie - which is more than in Scarface.

The Big Lebowski was recently named 'Best Stoner Movie of all Time' by Rolling Stone. The film beat the likes of Pineapple Express, Harold & Kumar Go To Whitecastle and Snoop Dogg-starring Soul Plane.

The repetition of "Shut the f*ck up, Donny" is a reference to Fargo, as Steve Buscemi's character would never shut up.

Walter's character is partly based on legendary screenwriter, John Milius, a right-wing gun nut with a love of the military.

John Turturro originally thought the role of Jesus would be bigger, but the Coen brothers allowed him to put his own spin on the character, such as shining the bowling ball and his dance moves, which he claims were inspired by Muhammad Ali.

In the original script, The Dude drove a Chrysler LeBaron, as Jeff Dowd once owned one, but that model wasn't big enough to fit John Goodman, so it was changed to a 1973 Ford Torino. Two cars were used during filming - one was destroyed, the other later destroyed in a X-Files episode.

When writing the film, the Coen brothers created roles specifically for John Goodman and Steve Buscemi, but at first did not know who would play The Dude.

To create the POV bowling ball shot, the Coen brothers mounted a camera on something closely resembling a barbecue spit, and rolled it down the lane.

John Goodman originally thought Walter should sport a different style of beard, but the Coen brothers insisted on the 'chin strap' as it would match Walter's buzzcut hairstyle.

Everything in The Dude's second dream sequence is a reference to an earlier scene. The black and white tiles are from the Big Lebowski's house, the tool belt and workman outfit is worn by Karl Hungus in Logjammin', Saddam Hussein is mentioned by Walter outside the bowling alley and overheard in George Bush's speech, the scissors worn by the Nihilists are in a painting on Maude's wall, and Maude Lebowski's trident is from a statue at the Big Lebowski's.

The character of Uli originated on the set of Fargo, as Peter Stormare would often speak in a faux-German accent.

All the music throughout the movie is revealed to be playing on a radio. The Man in Me during in the first dream sequence is heard on The Dude's Walkman as he wakes up, Hotel California is revealed to be on the bowling alley's stereo, and the film's opening song, Tumblin' Tumbleweeds, fades into a muzak version of itself when The Dude is in the supermarket, and is reprised in its original form as he leaves.

When Jackie Treehorn's thugs reappear, they have swapped clothes.

The bowling alley scenes were filmed at Holly Star Lanes in Santa Monica, but have since been demolished and turned into a school.

Jackie Treehorn's house was designed by famous architect, John Lautner. Though it appears in the movie as on the beach, it's actually on the side of a hill in Los Angeles.

Donny's remains finish a three-movie long Coen brothers joke, where Buscemi's characters get smaller in death. In Miller's Crossing, Buscemi was seen as a dead body, in Fargo a severed leg and in The Big Lebowski he is just ash.

When The Dude slides down the bowling lane in 'Gutterballs', Jeff Bridges was in fact too big to fit through the dancers' legs. This was eventually shot in two separate parts, with Bridges then digitally shrunk so he would appear to slide through.

The coffee shop where The Dude and Walter discuss the severed toe also features in American History X and Reservoir Dogs. It's called Johnie's Coffee Shop and can be found in Los Angeles, though it is only used as a filming location and not a functioning diner.

Donny gets a strike with every bowl in the film, except his last, which comes moments before he dies.

When one of the Nihilists, Uli, orders pancakes at a diner, this is a reference to Fargo, where Peter Stormare's character wants to eat at a pancake house but never gets to.

The movie is loosely based on Raymond Chandler's The Big Sleep, as the Coen brothers wanted to create a film centred around an unraveling mystery and complex plot that turns out to be unimportant.

When Walter single-handedly fights the Nihilists, there's a billboard for 'Ben Hur Auto Repair', this is a reference to align Walter with the famous Jewish hero, Ben Hur.

On The Dude's mantelpiece there's a picture of a bowler, which is actually a famous picture of Richard Nixon. A keen bowler, the shot was taken in the bowling alley beneath the White House.

US burger chain In & Out Burger is referenced during the film. John Goodman once did a radio advert for the brand.

Julianne Moore claims the character of Maude was based on artist Carolee Schneemann, who was famed for working naked from a swing, and Yoko Ono.

The clip of Jeff Bridges saying "I'm the Dude. So that's what you call me. You know, that or His Dudeness, or Duder, or El Duderino..." was played on stadium screens whenever former Philadelphia Wings lacrosse player Tom Ryan scored during a game. Ryan, nicknamed The Dude, was famed for his long dreadlocks.