5 things we learned brewing our own beer, California style

ShortList heads to the Lagunitas brewery to brew our own beer - and you can taste the results. 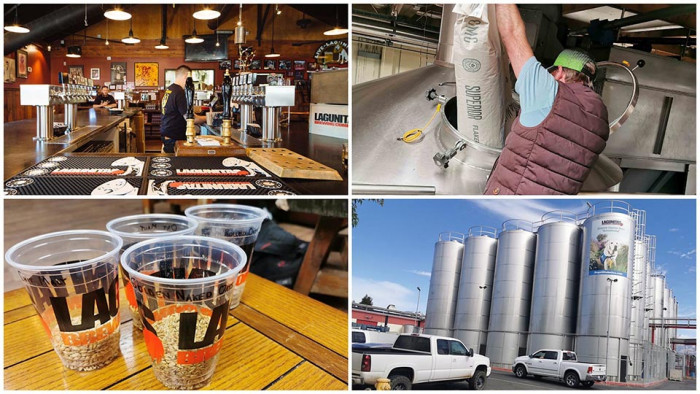 It was a call we didn’t take lightly. California-based brewer Lagunitas wanted ShortList to help them brew a beer. Now, we’re more than happy to knock down a few swift ones but creating our own beer? That’s not something we had done since university, when the concoction we kept in the small cupboard under the stairs had to be chucked out because of the smell.

Our beer-based mission was a tough one: we had to ‘hop’ on a plane from rainy London, fly 11 hours to San Francisco where we would have a quick overnight stop to sample some of the beer culture at Haight Ashbury.

The highlight here was Tornado, a fantastic bar packed with the best beers. We chose Russian River’s Pliny The Elder and did not regret the choice one bit.

Then a few more bars, including Vesuvio Cafe, where Dylan is said to have frequented. The jet-lag had already kicked in by then, so we're still not sure if we had frequented it either.

The next day we were on a minibus to Petaluma, a pretty town a few miles from San Francisco chosen by Lagunitas’ founder Tony Magee after the brewery outgrew the town it’s originally named after.

The reason for Petaluma, according to Lagunitas’ global cultural training manager Russell Smithson, was because the journey to work was on the coast, which was a lovely thing to look at while high. For a brewing company that was bought out by Heineken in 2015, it’s great to see that its blunt culture hasn’t been, well, blunted.

Weed, as we found out during our trip, is very much part of the Lagunitas culture. Although careful to make sure that the brewery itself is free of the stuff - there have been altercations with the police, before the brewery got to the size it is now, an incident which inspired its Undercover Investigation Shut-down Ale - it’s part of California’s laid-back scene and is now even entwined in some of the drinks Lagunitas makes.

Hi-Fi Hops is the company’s cannabis-infused hoppy sparkling water - zero-calories, and zero-carbs - a drink infused with THC and CBD from locally-grown cannabis. This is currently sold in legal dispensaries in California and something we sampled alongside many a Lagunitas’ ale, while on something called The Dip.

The Dip, we were told while sipping much-needed Bloody Marys and munching on breakfast Burritos in Lagunitas’ very welcome welcoming area, was something we were to all go through, before we even started thinking about brewing any beer.

It’s a rite of passage that all Lagunitas' staff go on, and there were even a few that went with us for the ride... we think. Because that’s where it gets a little ‘hazy’.

The tour took us on the coastal drive, Magee and others would take when starting the company up. We stopped off at a brilliant place along the way to shuck oysters and visited the original shack that brewed the first Lagunitas beer.

We went to a forest, too - I can’t really remember why - threw a frisbee on the beach, drank copious amounts of beer (Hazy Memory, Daytime and Born Yesterday our favourites) and sampled some of that locally grown THC and CBD.

We all survived, just. We were in bed by 9 (and that was after getting some shut eye on the bus home). This meant at least we woke afresh for the day of brewing ahead even if it did mean sheepishly missing the evening meal.

While all this was fun and games, getting down to the actual brewing of the beer was serious business, all lead by Head Brewer Sam Thompson.

Here are 5 things we learned, from the experts, about making our own beer...

1.There are A LOT of hops to choose from

We ended up choosing a mixture of four hops for our brew but there could have been a ton more. You see, you have the traditional hops that many brewers use, but also the experimentals. “We like experimental hops as we like playing with them to find new taste,” said Thompson. “We have a good relationship with our hop growers, so they send us stuff that isn’t fully named yet.”

We smell tested a variety of hops through an aerator (which 100% wasn’t used for weed back in the day). For our batch, we ended up choosing four: Cashmere (packed with exotic tropical notes), Chinook (slightly spicy with a grapefruit tinge), Citra (an aroma hop packed with citrus notes) and one of the experimentals, called 431 (nice and bitter, with a decent amount of earthiness).

2. Getting the combination right with the barley and the brewing is key

There aren’t that many components to beer. You need some sort of starch source to turn to sugar, water, yeast and some flavouring in the form of hops. We taste tested a lot of grain on the trip to get the right starch source. Everything from chit malt, roasted wheat, golden oats, torrified wheat… it can all make beer and makes a massive difference in the colour. And when it comes to the order you put the hops in, that’s key, too.

“We want to add in the chinook first, as the beer and yeast is fermenting, to keep the smell locked in,” said Thompson. “If you can smell the hop in the brewery then it’s gone from the beer so we want that smell to stay in the beer”.

We all decided that we wanted a hazy beer and there’s a particular way that you get that haze. Here comes the science: “We aren’t going to filter this beer, we will pass it through our centrifuge to remove the biggest particles so you aren’t chewing on hops and we won’t cold crash this beer either,” said Thompson.

“Cold filtering is the best way to get it cleared so to make a hazy beer, you don’t make it as cold. That keeps some of the protein and suspension, and helps with a compound called glycerol - that drops out if you drop the beer below 4 degrees. Glycerol gives a beer that rounded mouth feel which is what you want in a hazy IPA and keeps some of the haze in suspension as well.”

4. The first taste of brewed beer is like a warm sugary cereal treat

While it takes a few weeks to full brew beer, the actual process only takes a few hours to make wort - the sugary substance that is added to the fermenting process. We had a taste and it’s just like sugary cereal. The sugars here are maltose and maltotriose and all of this is mixed with the yeast to start the fermentation process - and also with the chinook hop to lock in the flavour.

5. Naming a beer is very hard

“There’s probably 10,000 beers out there like yours already,” says Ryan Tamborski, Art Director for Lagunitas.

Great, that fills us full of confidence that our beer is going to do well. But, what we think he’s trying to tell us is that this is why the label and name for the beer is so important.

There’s another issue, though: “When it comes to naming these beers, it gets really complicated as we have two schools of thought: take IPA, it's descriptive and you know exactly what you are getting. Then there’s a name like SuperCluster - what the fuck is that? We even describe it as a mega ale but that’s not a thing. We made it up and we’re fine with it, but it does mean that you know it’s a big beer,” notes Tamborski.

So, be descriptive and not descriptive. Right, gotcha. We also weren’t allowed in-jokes as nobody else would get them. Given my 9pm bedtime due to the effects of The Dip that was probably a good thing.

For name ideas, we went down the pale route: Pale Whale, A Winter’s Pale, WithPail and I, A Pale of Two Cities, Lime and Punishment… Tamborski laughs. It turns out they’ve all been taken and used a hundred times over. That sound you hear is our pun crown slipping.

We finally all agreed on Hazy Suzanne - as you know what you are getting and there could be some Joker-like backstory, where the history of Suzanne changes for each person drinking the thing. Tamborski is a bit more convinced but it will have to go through Lagunitas’ approval.

We had zero faith in us getting Hazy Suzanne approved but it was! And the beer should be in bars up and down the country before the year is out (exact date TBC). We do know that Belushi’s bars in London, Bath, Edinburgh and Newquay will stock it, so if you find yourself in one, just ask for a Lazy Suzanne - the first Shortlist (alongside some others) created beer.

Failing that, you might want to check out our best craft beers and best gluten-free beers guides.