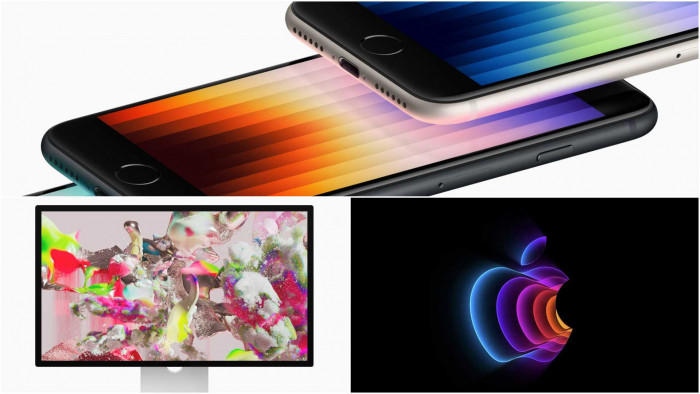 Not one to pass up on a pun, Peek Performance was the name of Apple's March event and we got a nice 'peek' at a number of upcoming gadgets from Apple, including new additions to its iPhone and Mac range.

Given the way the world is right now, it was a more sombre event than usual - they just got straight to it - but that didn't stop Apple from showing off some supercharged goods that it hopes its fans will lap up.

Here are the five things Apple just announced that has gotten us very excited indeed...

Apple says about the new iPhone SE that "from the very beginning we designed iPhone SE to include some of our most advanced features and technologies while delivering the iPhone experience at an incredible price." And they aren't wrong, with the handset launching from $429 / £419.

This is a compact iPhone, with its Retina HD display measuring: 4.7 inches. Apple reckons it offers "incredible colour accuracy" also a durable design that "includes the toughest glass on a smartphone on both the front and back. It also matches iPhone 13 and iPhone 13 Pro and with IP67 water and dust resistance.

The iPhone SE has an old-school home button which offers Touch ID, a better battery life and it also comes with 5G.

It also has a 12 megapixel camera and takes advantage of the A15 bionic chip.

The new iPad Air is the most powerful tablet yet, thanks to the use of the M1 chip which can also be found in the MacBook Pro.

Apple is using the phrase: Light. Bright. Full of Might. Which is a bit too close to 'young, dumb, full of...' for our liking but the new device certainly sounds decent.

"Whether you're in college students taking elaborate notes, a content creator working on your latest project or a gamer playing the hottest titles, great performance is a key reason users choose iPad Air. So the new air takes a massive leap in performance because we're bringing the breakthrough M1 chip to iPad," says Apple.

The new CPU offers 60% better performance and twice as fast graphics. Apple cheekily mentioned that the iPad Air is twice as powerful as the best Windows laptop in the same price range (and also mentioned that said laptop is three times thicker and four times heavier than iPad Air. Oof).

The iPad Air has a liquid retina display, with 500 nits of brightness and an anti-reflective coating. It also has a 12 megapixel ultra wide camera (but if we ever see you taking pictures with the thing, then we can never be friends) and 5G functionality is also available.

The new iPad Air comes in Space Grey, Starlight Pink, Purple and Blue. It's available in 64 and 256 gigabyte configurations and is available from 18 March from $599 / £569.

Apple has offered up a new Mac range that's pretty much for the 'ultra' users - those fancy creatives that fancy making something creative.

Mac Studio is available in two variants: Mac Studio with the M1 Max chip is a high performance machine that will benefit most users, but those that really need a blast of power, will want to look at the Mac Studio with an M1 Ultra chip. Apparently this setup "takes performance to a whole other dimension".

The CPU performance on Mac studio with an M1 Ultra is up to 3.8 times faster than the fastest 27 inch iMac out there and it's up to 90% faster than Mac Pro with 16 cores, according to Apple.

Graphics performance on Mac Studio with an M1 Ultra is 4.5 times faster than a 27 inch iMac. In fact, Apple is offering 48GB of video memory and a jaw-dropping 64GB of unified memory with the M1 Max and 128GB with the M1 Ultra.

Studio Display is a brand-new monitor from Apple. It has an all-screen design with narrow borders. It's all aluminium, has a slim profile, and the stand allows you to tilt the display up to 30 degrees. It's a 5K Retina display, with 600 nits of brightness,

It has an A13 bionic chip inside, which helps with the audio and camera technology inside and it comes with a 12 megapixel ultra wide camera.

Audio wise, this is a powerful thing with a six speaker sound system built into the display. There are three USBC ports on the display, as well as a Thunderbolt port.

Apple showed off a number of new movies that will be available on its service, including Spirited which is a take on the Christmas Carol story, starring Will Ferrel and Ryan Reynolds.

It also announced that it was 'doing a Prime Video' (our words), by offering sport through Apple TV Plus. This comes in the form of Friday Night Baseball.

Tim Cook said about the new sports offering: "tune in on Friday nights for two games you can only see on Apple TV Plus. This is going to be the best way to watch baseball on your iPhone, iPad Mac and anywhere that Apple TV plus is available."