When power corrupts, in the most extraordinary way. 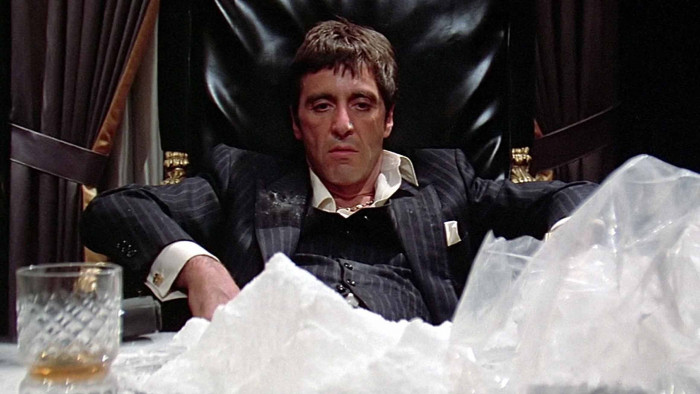 Scarface is one of the best movies of the '80s, perfectly capturing the era's excess. The movie has a surprising amount of amazing detail - much of it you may actually miss on a first viewing. That's where we come in, we've watched Scarface far too many times than is normal and come up with a number of surprising Scarface facts - 15 things about Scarface you probably didn't know. But, first, a little bit of scene setting...

It's been some 39 years since Scarface first came out in cinemas. 39 years!

It's hard to believe it's been that long, considering it's still oft-quoted by movie fanboys and wannabe gangbangers alike, and has been pastiched in everything from Lock, Stock and Two Smoking Barrels to Ace Ventura, Pet Detective. And it's great to see that Pacino is still going strong in this year's The Irishman.

Given that you probably know the movie inside out, front to back and with several advertising interludes in between, here are 15 things you don't know about Scarface. Probably.

It was Al Pacino who first came up with the idea to remake Howard Hawks original 1932 film.

2. De Niro was nearly in it

Robert De Niro allegedly turned down the role of Tony Montana, and John Travolta was considered for the role of Manny Ribera, even meeting Al Pacino in 1981 to discuss it.

Despite its Miami setting, most of the film was shot in Los Angeles. The Miami Tourist Board declined the request to film there, as they feared the themes of drugs and gangsters would deter holiday-makers from visiting.

Steven Bauer, who at the time was an unknown actor, was told he had the part of Manny before auditioning, as he looked the part. He was also the only actual Cuban amongst the cast.

The picture of 'General Cocombre' that Sosa shows Tony during his interview is actually Luis Arce Gómez, a Bolivian Colonel of the infamous 'Cocaine Coup' of the early 1980s.

Scarface was originally given an X rating, but the third cut of the movie eventually received an R rating. However, director Brian De Palma released the first, uncut version to cinemas anyway, without the film board's knowledge.

7. Princess Leia was nearly in it

Due to such lengthy rehearsals, Al Pacino and Steven Bauer claim to have known their lines and characters so well that they could've easily toured the movie as a play.

Despite its now iconic status, the film was slaughtered by critics upon release, due to its graphic violence, foul language and drug use. One person who sung the film's praises from the start, however, was actor Eddie Murphy.

The 'F word' (and its variations) is used 226 times during the movie, which averages out at 1.32 f*cks per minute.

Scarface writer Oliver Stone wrote the film while battling his own addiction to cocaine.

Al Pacino suffered a couple of serious injuries while shooting the film. He was cut with a piece of glass thrown by co-star Michelle Pfeiffer, and also burned his hand during the climactic gun battle by inadvertently grabbing the gun's barrel, which halted filming for two weeks.

During the shootout at Tony's mansion, there is a single shot directed by Steven Spielberg, who was visiting the set at the time.

Despite the movie's title, Tony Montana is referred to as 'Scarface' only once in the script, in Spanish ('Caracicatriz').