Here are the books we can't get enough of right now. 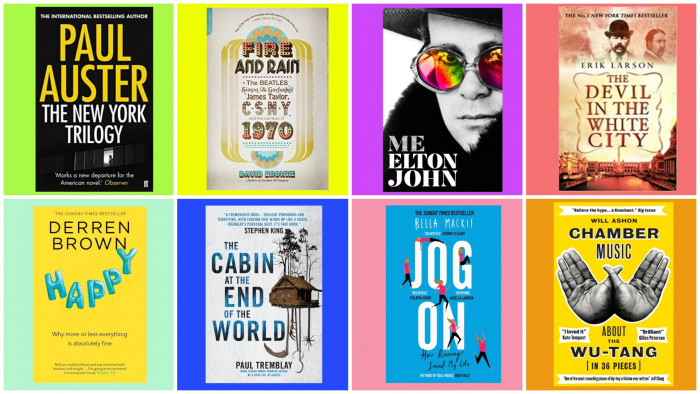 Life is just a little bit different at the moment. So, because many of us face some extended time at home, we thought you would like some book recommendations from the team. These aren’t tomes that are necessarily with major discounts or world-renowned (though many are), but books that really mean something to us.

UPDATE:If you are looking for something to read but don't want to spend money right now, then head to our best free Kindle books guide - it's packed with classics that are free to download right now.

The following is a list of things we have either read recently or keep coming back to because they are so good. Some of them will be fitting for the current climate - others are just brilliant examples of the written word.
If you are looking for Kindle book deals, then this is the place to go. And if you want something to read for free, then head to our best free Kindle books guide - which is packed with classics.

Enjoy, take care, and let us know on Twitter the books that you have been reading to pass the time.

1. The Art of Travel

While Consolations of Philosophy is the better book, this is an essential read right now as it will help you understand just what travelling does to our psyche and why we all want to travel and explore new things. While that may feel like torture during a time when the world is in lockdown, there is a wonderful chapter all about Xavier de Maistre and how he ‘travelled around his room’ while in isolation in Turin.

By Simon Mayo and Mark Kermode

The wonderful Simon Mayo and Mark Kermode know a thing or two about movies and here they offer up a movie or two as a prescription to remedy how you're feeling. For example, if you're feeling anxious right now, then 84 Charing Cross Road and The Big Lebowski are the perfect antidote to help take the world’s burdens away.

3. The Devil in the White City

Larson’s true crime book tells the story of H.H. Holmes, a serial killer, active during Chicago’s 1893 World’s Fair, who built his own house of horrors. His creepy-as-all-hell murder hotel came complete with sound-proof rooms, secret passages and chutes that dropped straight to the basement so he could dispose of his victim’s bodies. Last we heard, the book was in development as a TV series, produced by Scorsese and DiCaprio and it's a cracking read.

4. Happy: Why More or Less Everything is Absolutely Fine

We’re used to seeing Derren Brown put members of the public through extraordinary situations in TV specials, so you might not expect too much from this book on happiness. Trust us, you’ll be pleasantly surprised. It’s a brilliant exploration of what it means to be happy, why most self-help books are counter productive, and it might just leave you feeling that bit better about the world, even when times are tough.

5. Jog On: How Running Saved My Life

This book will persuade even the biggest couch potato to get up and do some exercise, even if it’s simply getting on that treadmill that’s been gathering dust for months (if not years). Bella Mackie is warm, brutally honest and frankly hilarious as she talks about her own mental health, her jogging journey and why she doesn’t care how far or fast you run. Comedian Joe Lycett described Jog On as “a simple but effective antidote to an anxious world” and we couldn’t agree more.

6. The Cabin at the End of the World

Contemporary horror at its finest (and a bit of a bargain at this price, too), Cabin tells the story of a family - Erik, Andrew and their seven year old daughter, Wen - who are holidaying in a remote cabin that is invaded by a group of cult-like weirdos who force the family to make a terrible choice that might just save the world. We like it because it’s smart, literary horror, that really gets under your skin in a way that few others books do.

A stunning book for anyone who wants to know how society, economics and politics not only shaped one of the best rap groups in the world but hip-hop as a whole. Brilliantly written by former journalist and record label owner Will Ashon, who turns the narrative on its head in the end when he begins to doubt himself as the person who should be writing the book (being that he’s white, Oxford educated and British). He is, and this is a must-read.

A fascinating snapshot of a year that saw the rise and fall of a number of the music world’s biggest artists. The Beatles implode, Simon and Garfunkel hit their peak - and immediately break up, and CSNY barely seem to be able to get through a single show without falling out. There’s lots to enjoy in this well written story of the moment the swinging 60s well and truly gave way to the 70s.

An essential purchase for anyone who likes their detective fiction with a nice slice of meta. It’s the first story of the three, City of Glass, that’s essential. The premise is brilliant: Quinn, a writer, is phoned up out of the blue asking if he is Paul Auster - not the author of the book but someone who owns a detective agency. He’s not but pretends he is - what ensues is a mind-boggling adventure that will have you Googling as soon as you’ve finished it. The best thing is there are two other stories after you finish City of Glass, both highly recommended.

If you thought the film Rocketman blew Bohemian Rhapsody out of the water, then you should definitely pick up Elton's biography for more candid and entertaining stories of rock 'n' roll excess. Worth mentioning, that this was probably the funniest book we read last year. Look out for the moment Elton and John Lennon are holed up in a New York hotel room when an unexpected visitors turns up ... or the time a very high Elton mistakes Bob Dylan for his gardener. The whole book is a hoot from start to finish.