From Reservoir Dogs to The Hateful Eight - these are the best moments.

Quentin Tarantino is a master of cinema, with his movies both entertaining and celebrating the very medium he is so passionate about.

You can see it in his 2019 movie Once Upon A Time in Hollywood. This is Tarantino at his finest. Mining the near past for stories that fit his want for movie nostalgia, and a little bit of ultra-violence. The result is a fantastic reinterpretation of the Manson murders, that's a heady mix of violence, comedy and nostalgia.

Once Upon a Time in Hollywood is Tarantino’s ninth (and possibly penultimate) movie. Here we take a look at Tarantino’s nine movies and pick the best moment from each.

This isn’t always the moment you think of. Don’t go into this list thinking you are going to read all about that ear scene. Instead, we've chosen the part of the movie that is perfect Tarantino, whether it’s the dialogue or something else entirely.
We are the first to admit could have made this list five times over with different moments - we still can’t believe that the Kill Bill eye pluck didn’t make the list - but the following is true Tarantino.
*Warning: there are some mild spoilers ahead 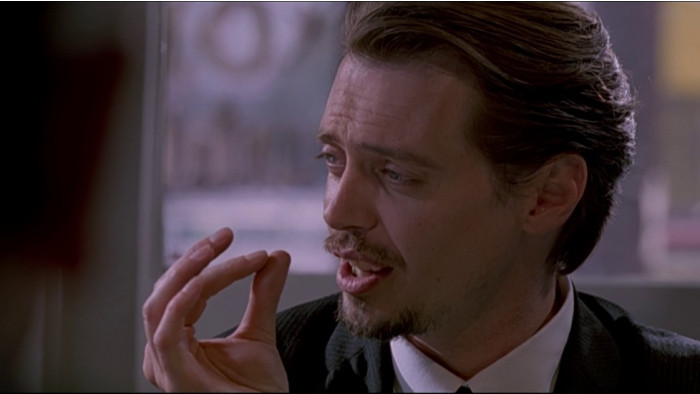 Before Reservoir Dogs’ iconic title sequence, where the merry band of robbers walk slow-mo to Little Green Bag looking like the coolest cats on the planet in their black suits and ties (okay, and Nice Guy Eddie in his shell suit), there's a brilliant sequence that manages to sum of the personalities of all the crew in a matter of minutes, and shine a light on just how incredible Tarantino’s dialogue is.

Hot off the back of a conversation about how Madonna’s Like A Virgin is about something else entirely, Mr Pink (Steve Buscemi) goes on a polemic about why he refuses to tip waiting-staff. The whole scene precariously balances between hilarity and potential mayhem - which is pretty much the whole movie in a nutshell. 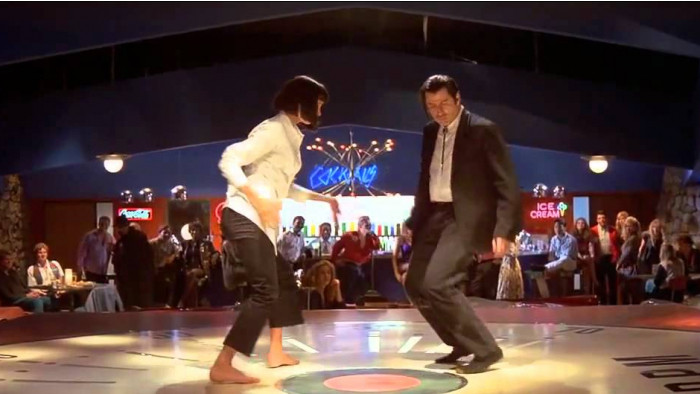 If you are going to cast John Travolta in your movie, then you better get him to dance. And that’s exactly what Tarantino did in Pulp Fiction, hands down his ultimate masterpiece. The scene between Uma Thurman’s Mia Wallace and Travolta’s Vincent Vega is pure pop culture bliss.

The whole thing is set in a diner called Jack Rabbit Slims, a barely recognisable Steve Buscemi serves them as a two-bit Buddy Holly (edit: we originally said Elvis and have scorned ourselves because of this), and a five-dollar shake is ordered. Then, You Never Can Tell by Chuck Berry comes on and they both dance, and it’s fantastic. In a movie (literally) punctured with violence and vicious moments, this is a wonderful respite before all hell breaks loose. 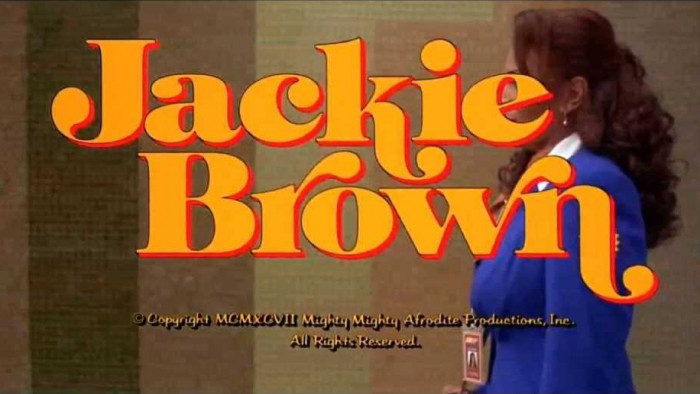 The title sequence to Jackie Brown is perhaps the best thing Tarantino has ever shot. Seriously. The nine-cut sequence manages to, once again, explain the main character’s motives and personality without even muttering a word. From the music used (Bobby Womack’s fantastic soul tune about someone striving for a better life), to the font (the same as Foxy Brown, which also stars Pam Grier), to the close-ups, the confidence, the hurried running that Grier does near the end… all of these are winks to her character, and the situation she will eventually find herself in - and it’s simply perfect. 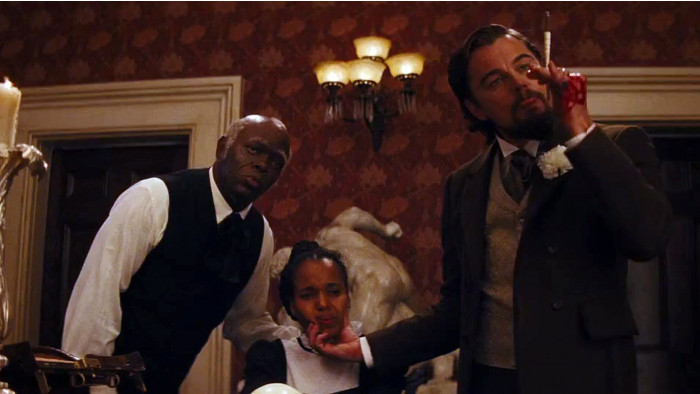 A glass smashes. Leonardo Di Caprio looks at the cut in anger and carries on berating Jamie Foxx and Christoph Waltz. The blood trickling from his hand was real, the impish look in his eyes acting. He even makes sure the camera gets a good look at his bloodied palm.

This is part of the best scene in Django Unchained - that of the Candyman showing his true, rotten teeth andcolours, trying to control two characters whose modus operandi is eventual freedom. 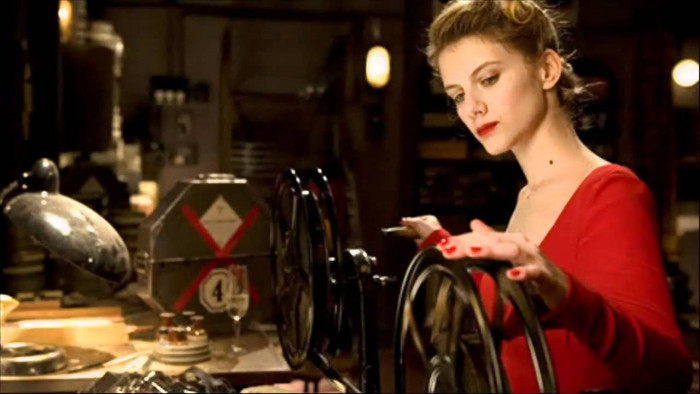 As you’ll find out with Once Upon A Time In Hollywood, Tarantino loves a bit of revisionist history with some of his movies acting like an alternate timeline packed with cool tunes and snappy dialogue. Inglourious Basterds sees World War II ending early thanks to the power of movies. Key to this is a scene that will stay with you for a long time: the killing of Adolph Hitler. There’s no bunker and pill job here, but Eli Roth and another putting on gloves with guns and gearing themselves up for the ultimate showdown with the truest of evil. The result is a visceral onslaught set in a cinema pumping out propaganda to the masses; it’s pure pulp fiction at its best. 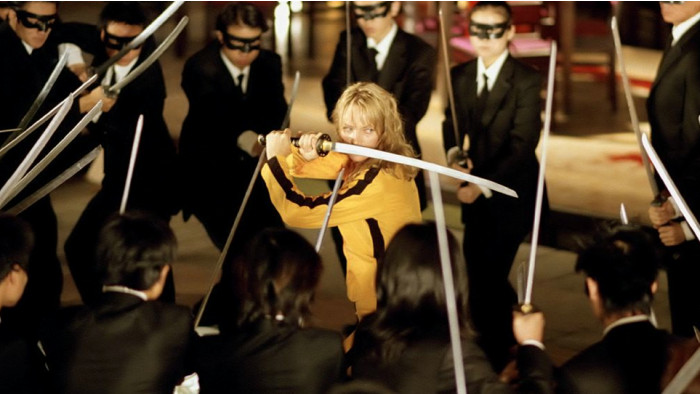 6. We all go a little Crazy sometimes

Kill Bill is a movie that has been hacked and sliced more times than The Bride has in the movie. Originally split into two movies, by disgraced movie mogul Harvey Weinstein’s Katana blade, Tarantino now classes both films as one Whole Bloody Affair. The moment that sticks out from the kung-fu classic is The Bride versus the Crazy 88 gang. It’s such a ludicrous set piece that it’s jaw-dropping.

What makes it really special, is a bunch of knowing nods to Asian cinema old and young. The yellow jumpsuit homaging Bruce Lee, the Gogo Yubari character that plays tribute to Battle Royale, the vertical slice from Ichi The Killer - it’s all there in blood red and (because of some last-minute censorship) black and white. 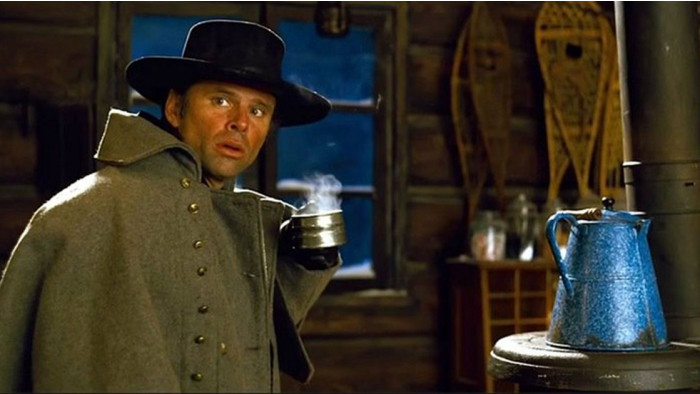 7. Was it something I Eight?

What begins as an intriguing whodunnit concludes in a shlock and sick tinged final act. The scene starts with some people drinking coffee. The coffee, though, is poisoned, and boy does Mr Russell put up a fight, flailing and puking over co-star Jennifer Jason-Leigh. This scene is a big flip away from what you think the Hateful Eight is going to be, with the fantastic Walter Goggins the reason behind the ensuing carnage. 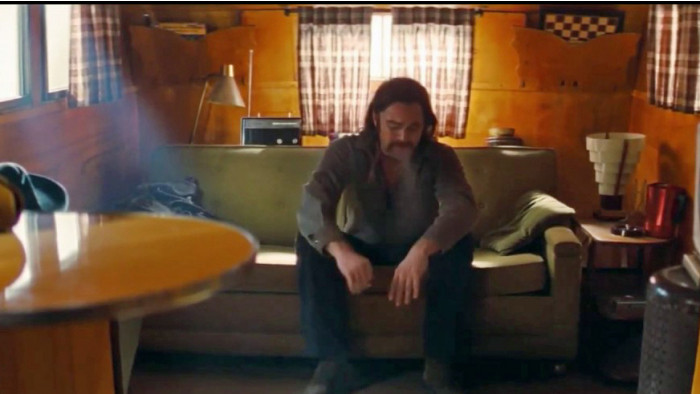 8. Rick has a breakdown

Rick Fucking Dalton is one of the greatest Tarantino characters. At one moment smooth, almost James Bond like but in another moment, drinking himself into a stupor and crying because he can't remember his lines. Leonardo DiCaprio is superb as Dalton, creating a character that lines the street in LA, a once famous actor now too old to be the heart throb, too young to play the grizzled veteran. 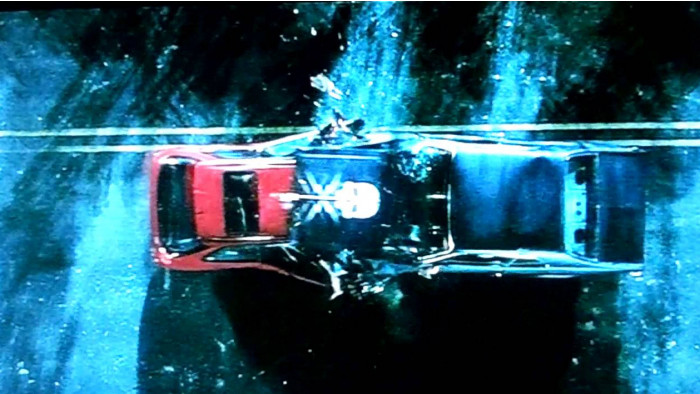 Originally the second half of the schlocky Grindhouse experiment (the first part belonging to Robert Rodriguez’ 80s sci-fi action fest Planet Terror), Death Proof was eventually given a full release with additional scenes, and it’s all the better for it. It’s not perfect, but nobody can fault the car crash scene in the first half of the movie.

It’s graphic, slowing down so you can see flailing limbs and crunching bones, but necessary - before this, Stuntman Mike (Kurt Russel) was just a guy in a bar chatting to some girls he’s just met. After this, he’s a savage serial killer, pummeling into his prey as if they were crash test dummies.