ShortList is supported by you, our amazing readers. When you click through the links on our site and make a purchase we may earn a commission. Learn more
Home > Kitchen

Courgetti at the ready, it's time to buy the best spiralizer.

You’ve probably heard of ‘courgetti’ as a perennial culinary favourite for the more health conscious among us but do you know which is the best spiralizer to make it?

Of course, courgettes are not the only vegetable you can put through a spiralizer – carrots, sweet potatoes, cucumbers and more can all be used to make delicious strips for salads, stir fries or more. You can even use fruit, adding apples, pears or more to breakfasts, desserts, and to decorate baking.

UPDATE: One you have finished with our best spiralizer guide, then head over to our best kitchen gadgets guide. The list has been hand-picked by our kitchen expert and there are 15 products on there that will look fantastic in any kitchen and may even improve your cooking skills.

Want to start spiralizing but not sure where to start? Here’s our guide to some the best out there. Upvote the spiralizer you'd put in your shopping basket. 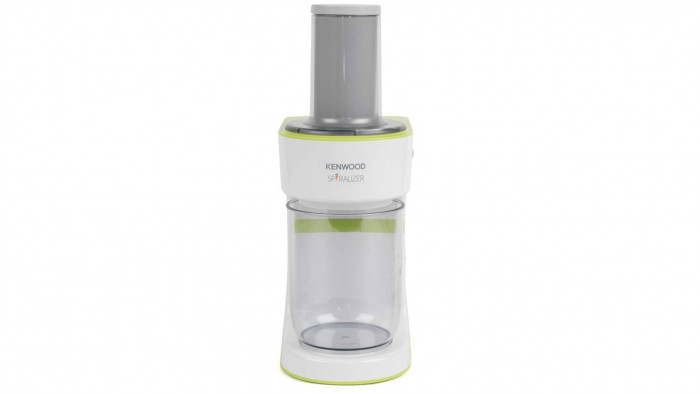 If all that cranking is making your arms ache, Kenwood has the solution in the form of this electric spiralizer.

It does have less variety than other models, with only two settings, spaghetti and pappardelle. But it’s much faster and much less labour-intensive than manual spiralizers. If you’re lazy or want something that’s not going to give you a workout at the same time, this could be the one for you. 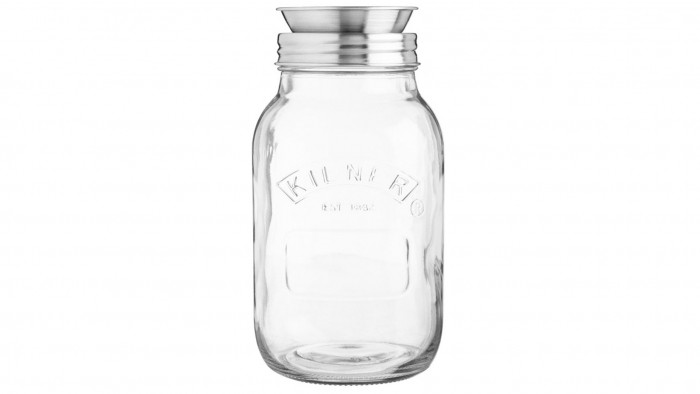 Kilner is well known for its wide range of gloriously retro bottles and jars for pickling, jams and more. And its spiralizer, a steal at £10, looks just as good.

The setup of this particular spiralizer is slightly clunkier than other models – there’s no crank or automatic motor to help you put your fruit or veg through the blades, so it’s just you and your elbow grease to get it through. But the jar is a brilliantly convenient way of storing veg after you’ve sliced it. 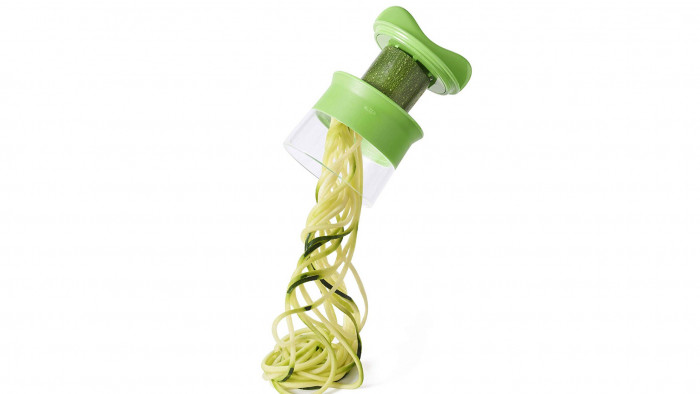 This works best for smaller fruit and veg – think carrots rather than sweet potatoes, for example. That’s not to say that the Oxo can only deal with thinner veg, and the company notes that beets and potatoes can also be sliced to make curly fries. Best of all, you can even pop it straight in the dishwasher. 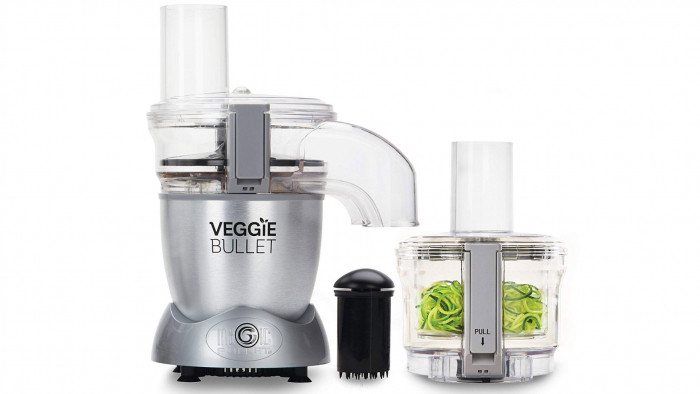 You’ve almost certainly heard of Nutribullet – but did you know it has its very own spiralizing unit too?

Awarded the Which? Best Buy award in its category, the Veggie Bullet is the perfect way to slice, spiralize and shred your veg. Absolutely no leg (or arm) work involved, you simply place your veg in the machine and let it do its thing.

It is significantly more expensive than other models out there, but if you’re serious about your health food it could be a good investment. 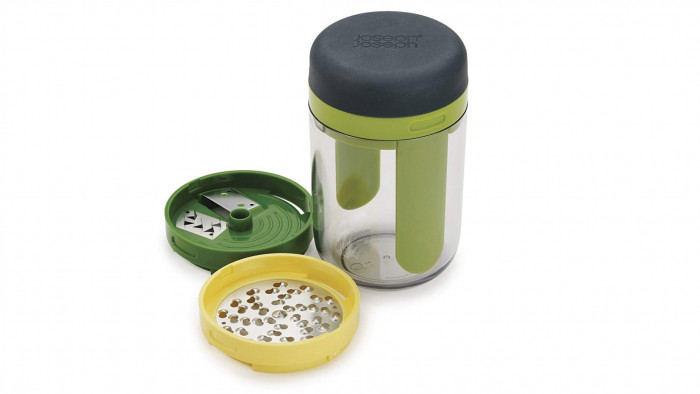 Joseph Joseph create all sorts of colourful kitchenware – and if you like a creative looking kitchen, this could be a good choice. Each of the three attachments, which provide a variation in noodle thickness, comes in a different colour.

And alongside the usual spiralizing blades, for thick and thin noodles, you can even use it as a cheese grater. 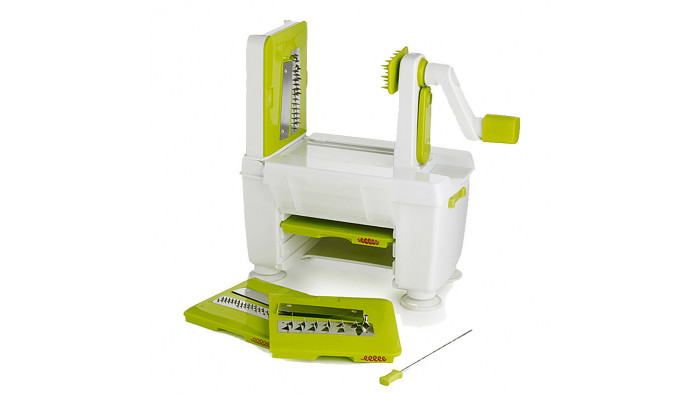 Lakeland has it all – any kitchen gadget you can dream up, you can bet it's there.

And you can’t go wrong with its easy-store spiralizer. As the name suggests, the tool is designed to be stored easily, so it won’t take up too much space in your kitchen cupboards. It also comes with four interchangeable blades, so you can mix and match with various shapes and styles of strip with whatever fruit or veg you please.

Unlike other spiralizers, it also works with larger pieces of veg – so that sweet potato will strip like a dream. 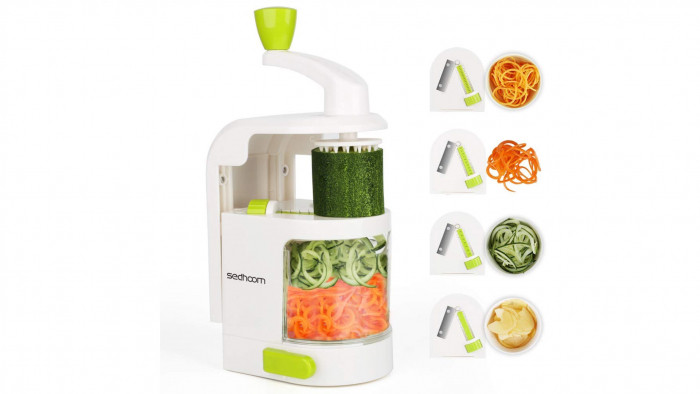 If you’re worried about the utter mess your kitchen is going to be in after spiralizing a bunch of veg, never fear – this model from Sedhoom has got you sorted. It comes with a miniature container, reducing potential clean up. There are also four separate, stainless steel blades to create a variety of different shapes and sizes.

A suction cup on the bottom also means it will stay in place as you spiralize. 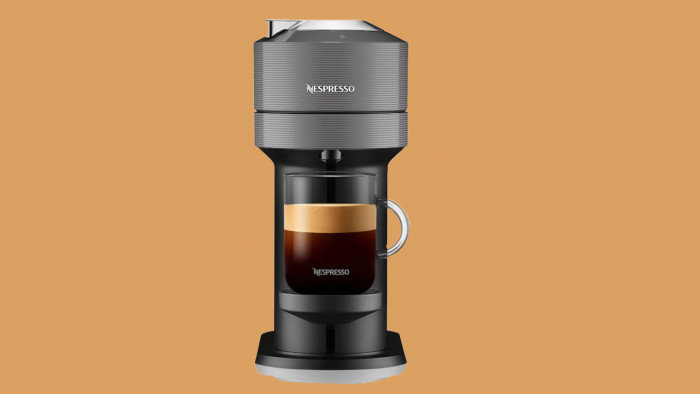