Don’t worry, it won’t get you high 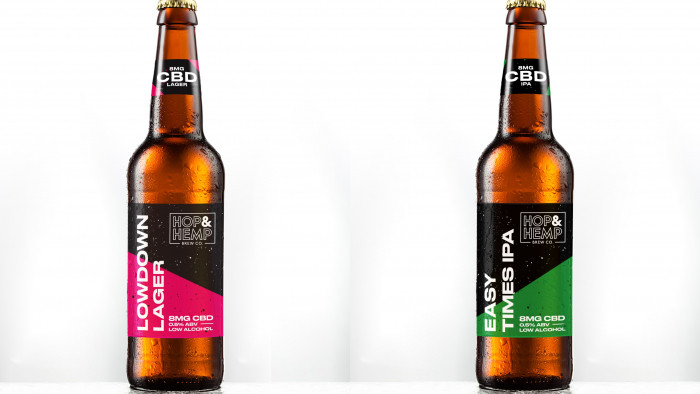 CBD seems to popping up more and more in the UK, with CBD oils, CBD-infused gummy bears and CBD hand creams all now readily available. Now, it is the turn of low alcohol beers to get a CBD makeover.

UK Brewery Hop & Hemp Brewing Co. have launched two new CBD-infused, low-alcohol craft beers; an IPA called Easy Times and a pilsner-style lager called Lowdown Lager. Hop & Hemp describe their mission as trying “to bring you delicious, original craft beers that let you unwind without the downsides of traditional alcohol content”. CBD, also known as cannabidiol, is a legal compound found in cannabis plants and is said to have stress-relieving properties. Both beers have an ABV of 0.5% and contain 8mg of CBD per 330ml bottle, though the CBD used contains 0% of psychoactive constituent THC. In terms of flavours, there seems to be something for most beer drinkers. According to Hop & Hemp, the Easy Times IPA “delivers bags of fresh fruit flavours” and additional flavours of biscuit and honey. Meanwhile the Lowdown Lager is said to have “a gentle, spicy hoppiness” and notes of citrus. Hop & Hemp’s James da Silva said: “We love beer. Sometimes maybe a little too much. That's why we made it our mission to create brews that have all the big flavours of the best craft beer that is suitable to drink throughout the day. “With no sore head and no Sunday write off, this product is perfectly placed to provide a viable alternative to regular ABV beers.” The beers follow in the footsteps of ‘High Flyer’, the UK’s first cannabis-infused session IPA launched March last year. This one seems to pack a bit more of a punch with an ABV of 4.3% and 10mg of CBD per 330ml bottle. Four bottles of Hop & Hemp Brewing Co beers will set you back £13 and the beers are already available to buy from the website. Not sure CBD is for you? Here is a list of some of the best alcohol-free beers around, or perhaps a more traditional bottle of one of our best craft beers