This canned water claims to enhance the taste of your whisky

It comes direct from the Scottish isle 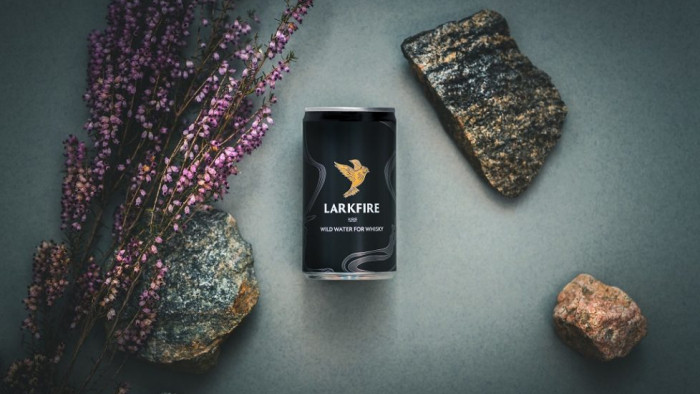 If you like your whisky rugged - and let’s be honest, who doesn’t? - then you’re sure to like the sound of ‘wild water’. Ideal for those who thought their drink couldn’t get more outdoors-y than ‘on the rocks’, the newly launched Larkfire water claims to enhance the natural flavour of your whisky.

Co-founded by two whisky enthusiasts, Larkfire water is sourced from the Isle of Lewis in the Outer Hebrides - home to 15% of the UK’s freshwater surface area. Water sourced from the Isle harbours a unique ‘soft’ taste that’s attributed to it being filtered through 3-billion-year-old gneiss rock. It doesn’t get much more rugged than that.

Thought to be the only canned water on the market created specifically to be paired with whisky, Larkfire even has some solid scientific evidence to back up its claims.

In 2017 Swedish chemists Björn Karlsson and Ran Friedman published a paper in the Scientific Reports journal citing specifically why whisky tastes better when water is added. The findings? Apparently water boosts the concentration of flavour compounds at the drink’s surface, enhancing the flavour. It’s news to our tastebuds.

“In Edinburgh and London you often see people add regular tap water to an expensive Scotch – the problem is tap water has been recycled several times before it even reaches your glass, and chlorine and fluoride are added, interfering with the delicate flavours found in whisky. Put simply, tap water shouldn’t go anywhere near a good scotch,” he notes.

“Consumers are becoming more discerning about not only their spirits but their mixers too. When you’re paying £20, £30, or even more for a single glass of whisky in a bar, you deserve to have the best water to pair it with.”

The brand are also doing their bit for the environment, ensuring a percentage of sales are filtered back into the area via an agreement with The Stornoway Trust - the body charged with looking after all 69,000 acres of land on the Isle of Lewis where the water is sourced.

Larkfire’s ‘wild water’ is now available to order from their website and costs £1 per can.