Tormund Giantsbane from 'Game of Thrones': what a dude

The massive bearded wildling is the total best 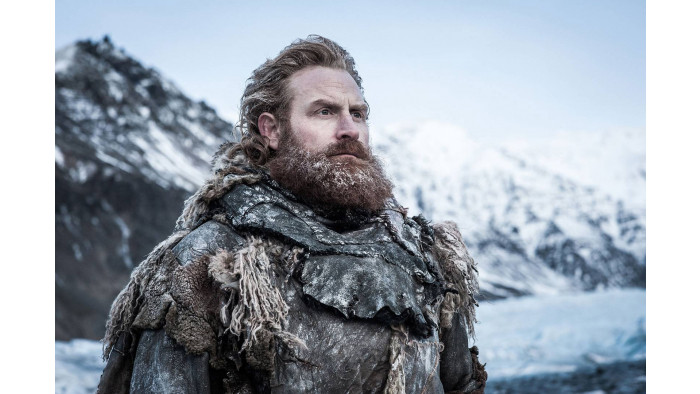 The eighth and final season of Game Of Thrones, the biggest show in the world, begins on April 14th. That’s ever so soon. HBO recently released a bunch of promotional images showing various characters sat on the Iron Throne, the spiky chair at the centre of Westeros that everyone is desperate to cut their bums on.

They put out 20 images in total, showing everyone from Jon Snow to the Night King to Missandei and Melisandre sat on the throne. But there wasn’t one with Tormund Giantsbane, who is the super best dude, on it.

His fate was left ambiguous at the end of season seven, so it was reasonable enough to assume that his absence was attributable to that, that HBO wanted to keep people in suspense as to whether Giantsbane and Bric Dondarrion made it into season eight. But then this trailer dropped and revealed that they’re fine - look, there they are, 30 seconds in, with Edd from the Black Watch:

He was obviously going to survive, and he’d better goddamn make it to the end of the series, because he is the total greatest. Played by Kristofer Hivju, he’s manifestly the awesomest character on the show. He’d be the awesomest character in any show. He’s a giant ginger Norwegian man-mountain, a big handsome bearded wildman. He looks like a sort of hipster Viking wrestler, a glorious vision of ginger masculinity. Hivju is in The Fate Of The Furious, a film that stars The Rock, Vin Diesel and Jason Statham, and even in that none-more-hench company seems like the one who, if he chose to, could beat the most shit out of you. (He probably wouldn’t choose to, he seems extremely nice.)

Hivju is an award-winning actor from a theatrical family, but you completely buy him as a bonkers, fur-clad barbarian who may or may not have once had sex with a bear. He seemed like pretty much a one-joke character when he was introduced - ho ho ho, that fella with the beard is pretty crude - but Hivju’s charisma made him a fan favourite. Hivju gets into character by channeling Rocky Balboa in Rocky IV, telling HBO’s blog: “When he has to face Dolph Lundgren [playing Ivan Drago], Dolph is running in a fitness center, with barometers everywhere on his body, but Rocky goes out in the woods and he chops wood and lifts trees. So that’s how I get in my wildling mode.”

(On a personal note, I am a bearded ginger man, and Kristofer Hivju is like the Super Saiyan version of me. He’s what I see in the mirror when I’m exactly the right kind of drunk. If I could learn how to do a Norwegian accent, and act, we could totally play brothers in the best show ever, a show that will only ever exist in my stupid ginger head.)

In the books, he’s also known as Tormund Thunderfist, and styles himself Tall-talker, Horn-blower, Breaker of Ice, Husband to Bears, the Mead-king of Ruddy Hall, Speaker to Gods and Father of Hosts. He’s not as good in the books, because he has a white beard, and the telly version’s beard is ginger and that is better. The book version says things like “See, lad, that’s why he’s king and I’m not. I can outdrink, outfight, and outsing him, and my member’s thrice the size o’ his, but Mance has cunning”, and it’s all a bit fiddle-de-dee even when he’s talking about his penis. The telly version says “pecker” a lot - none of that “member” nonsense - and swears like a trooper: “I have a jug of sour goat’s milk, stronger than any of that grape water you Southern twats like sucking on.” At one point he wishes Davos Seaworth “Happy shitting”. That’s delightful.

He should be the one that ends up on the Iron Throne - think about it. Nobody would see it coming, and GOT is a show that loves surprising its viewers. He has plenty of leadership experience from leading the Free Folk, so would probably be a good leader. And nobody, even die-hard fans of Jon Snow or Danaerys Targaryen who want to see them end up ruling Westeros, would really complain if Tormund ended up in the hot seat instead. He’s cool as all hell, and he’d probably make a funny joke about his willy, and everyone would love it. They’d be especially delighted if he had Brienne of Tarth beside him.

Ah, Brienne. Will the people in charge let Westeros’ cutest giant couple have a happy ending? Will Tormund’s wish - “I want to make babies with her. Think of it, great big monsters. They’ll conquer the world!” - come true?

Loads of characters, characters we really really love, are going to die in the six remaining episodes. There’s no way everyone we’ve spent eight years rooting for is going to make it. There’ll be bloodshed, and tears, and heartbreak, and anguish, but holy shit, please let Tormund Giantsbane make it. In the words of the man himself, “Gingers are beautiful. Kissed by fire”. He’d better still be standing there beautiful at the end.