These classic Star Wars games are being rereleased 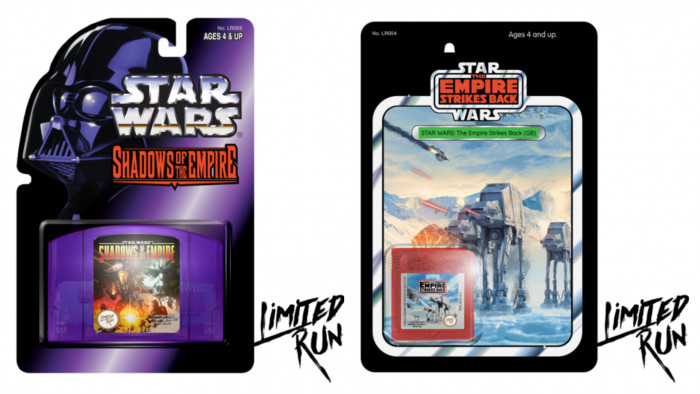 Limited Run Games has a couple of new releases ready to push hard on the nostalgia buttons of Star Wars fans everywhere.

The company is re-releasing Shadows of the Empire for N64 and The Empire Strikes Back for NES. And when we say “for”, we mean “for”: the boxes only contain cartridges for the original hardware, with no digital versions to play elsewhere.

Let’s talk about those boxes, though, because they’re pretty neat in themselves. They’re designed to look like the packaging of Star Wars toys from the same eras the games were released.

The release of these two titles follows hot on the heels of Game Boy title Star Wars which emerged last June in its new 21st-century return. Limited Run Games co-founder Josh Fairhurst told Starwars.com that there may be more to come, too. “Our next batch is going to be the Racer games,” he said. “We’re doing the original Racer on 64, Racer for PC, and then Racer Revenge on PS4. And I’m really excited about that because, like I said, I loved Racer on N64 and I love Racer Revenge.”

But if pod racing isn’t your bag, you may hold on for what Fairhurst is planning next. “After that, I think our next thing is gonna be Dark Forces, which I’m also excited about,” he said. “Because when I did finally get around to playing that game when I was younger, I loved it. And I think that Dark Forces is a pretty formative game for a lot of Star Wars fans, and it features Kyle Katarn, who everybody loves. So I think there’s gonna be a lot of hype going into that one.”

But we’re getting ahead of ourselves. If you’re interested in getting your hands on the current releases, they’re up for pre-order today. Neither may be in our list of the best retro games, but if you want to be transported to that galaxy far, far away (as they were a long time ago) you could do a lot worse.